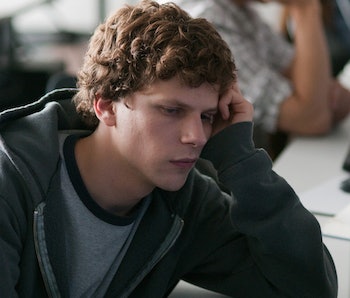 So much has been said about one of the most important movies of the 2010s, but new layers emerge every day.

A cursory glance at recent news involving Facebook, parent company Meta, and co-founder Mark Zuckerberg results in a miasma of stories loaded with numbing phrases like “class action lawsuit,” “misleading ads,” and, ugh, “the metaverse.” And even amid current financial woes and never-ending political turmoil, Facebook is still one of the largest companies in the world and boasts three billion active users worldwide.

Today the company is unrecognizable from its humble, grimy origins as a Hot or Not ripoff where Zuckerberg, as a Harvard student in 2003, made a website where users rated the attractiveness of female students. Despite threat of expulsion, and anger from students whose faces were used without permission, Zuckerberg went on to establish a digital “face book,” which at the time referred to glorified student directories with photographs.

"Everyone's been talking a lot about a universal face book within Harvard ... I think it's kind of silly that it would take the University a couple of years to get around to it,” Zuckerberg told the school newspaper, the Harvard Crimson, in 2004. “I can do it better than they can, and I can do it in a week.”

The creation of Facebook, and the legal warfare waged between Zuckerberg, ex-best friend Eduardo Saverin, and Harvard seniors Cameron and Tyler Winklevoss and Divya Narendra were documented in the 2009 book The Accidental Billionaires by Ben Mezrich. That book became The Social Network, written by Aaron Sorkin and directed by David Fincher.

Both for its own creative merits, as well as the continuing story of Facebook and its inescapable chokehold on modern living, The Social Network may be one of the greatest movies of the 21st century. Released in 2010, just in time to usher in a new decade of the internet, it’s as much a lively chronicle of the past as as a foreboding vision of what is now our present.

On its own, the movie is an unambiguous portrait of young male insecurities mired in capitalistic determinism. Through fine execution and bold artistic choices — a standout scene featuring competitive rowing uses arresting tilt-shift photography and “In the Hall of the Mountain King” — Social Network is astonishing, a movie replete with tension, heartbreak, and the gnawing emptiness atop the mountain of success. That it is also prescient about the dangers of insecure men who stumble into power, and our foolishness to surrender our most private details, makes The Social Network more than just a movie. It was, and always has been, a warning.

Jesse Eisenberg’s Zuckerberg, a career-defining role, is an awkward know-it-all anxious to be popular. After he’s dumped by his girlfriend (Rooney Mara), he drunkenly creates Facesmash, a website where students rate female classmates. Despite controversy, Zuckerberg is contacted by affluent and elite students, played by Max Minghella and Armie Hammer, to make a new website exclusive to Harvard students.

Complications arise when Zuckerberg launches his own social networking site, Facebook, with financial support from best friend Eduardo (Andrew Garfield), bringing into his orbit billions of dollars and countless friends and enemies.

Produced from a smart and efficient script by The West Wing’s Sorkin, The Social Network sports tight direction from notorious perfectionist David Fincher and eerie music by Trent Reznor. These elements collide with ferocity, resulting in something more otherworldly than the movie’s ultra-grounded scope can encompass.

In the film’s DVD commentary, Fincher noted that he first intended to use “Beyond Belief” by Elvis Costello for the opening, when Mark wanders from downtown Boston to the Harvard campus. Advised that the song was a poor fit for millennials, Fincher instead went with Reznor’s “Hand Covers Bruise,” a dark ambient track made up of a synthesized bass, droning, and a sustained piano medley.

The ominous feeling the track inspires, almost like it would for a horror movie, underscores the heavy steps of Mark’s long walk home. The change allows Fincher to illustrate the gravity, and the severity, of Mark’s actions. His inebriated keystrokes will inspire seismic cultural shifts equivalent to tectonic plate movement, if tectonic plates could trigger gigantic lawsuits. Even Reznor observed as much, telling The Quietus in 2010:

“At first, the film felt comfortable and familiar, college kids doing their thing, fucking people over, but when we put 'Hand Covers Bruise' in there it felt completely different. It felt that there was something going on under the surface, it felt that there was a frailty and vulnerability to it, and I was blown away at how music could do that.”

The rest of the movie lives up to its stone cold opening, from its lived-in grasp of 2000s college culture to its complete understanding of the internet, and the ways its nails have insidiously dug into our psyche. It’s the rare David Fincher film with a strong sense of humor (“Dating you is like dating a StairMaster”), but that never compromises on its consistently tense tone.

The Social Network’s own impact on the wider world rivals Facebook’s. Mark Zuckerberg said in 2010 that he’d heard from young people who saw it and embarked on entrepreneurship efforts. Critic Bob Lefsetz chillingly described the movie as powerful enough to make you “run from the theatre, grab your laptop and build your own empire,” never mind that much of it takes place in deposition hearings. In a careful balancing act, the film depicts start-up creation as exciting and sexy, no matter the personal cost the characters endure.

In the 12 years since release, The Social Network has maintained recognition as one of the best movies of its time, finding a high place on plenty of lists and praise from Quentin Tarantino. The hype is real. Every new story about Facebook, from lawsuits to data breaches to its relentless metaverse promotion, is a reason to revisit the unseemly ways it went online in the first place.

The Social Network is streaming on Netflix until July 1.