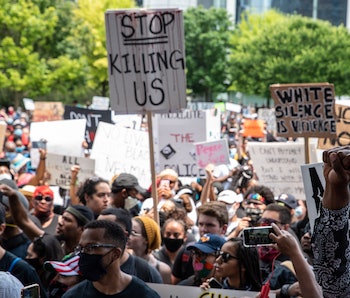 As protests took place around the country over the death of George Floyd, a Black man killed in May 2020 at the hands of police in Minneapolis, a spotlight was trained yet again on America’s decades-long history of police brutality toward Black Americans.

Racism has often been called America’s “Achilles’ Heel” by former presidential candidate Kamala Harris, and it’s more apparent than ever how it can destroy lives and communities with a speed unlike anything else.

In this episode of The Abstract, we look to the positive and the proactive for people living in this historic moment.

Our first story looks at how a positive movement called #BlackBirdersWeek takes on inequality by promoting diversity in the biggest space humans come together — nature. A week-long initiative celebrating Black birders, explorers, and naturalists, Black Birders Week aims to break stereotypes and increase the visibility of a diverse black community. While fighting against the discrimination that prevents more people from joining and enjoying nature in the first place, #BlackBirdersWeek has become a force of nature that brings to light a positive way to join communities together, and safely promote change.

Our second story is proactive and gives tips to people who want to peacefully march safely and effectively. One-third of Americans say they've felt the need to protest in their lifetimes, and as recent events cause that number to increase, some careful considerations can keep you safe should you aim to protest during a pandemic.

More like this
Science
6.23.2022 6:00 PM
Reptile longevity is even more complex than we imagined — study
By Elana Spivack
Science
6.22.2022 11:00 AM
Watch: These bats can memorize your phone ringtone, and it might help them hunt
By Jennifer Walter
Science
6.19.2022 1:00 PM
What is my dog thinking? Science may finally have an answer
By Tara Yarlagadda
Related Tags
Share: