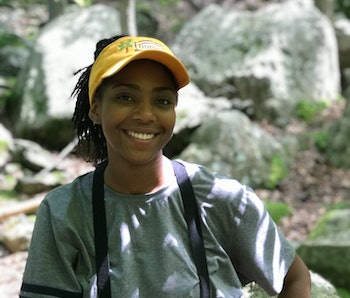 Last week, Christian Cooper, a Black man and avid birder, recorded a white woman named Amy Cooper threatening to call the police and say “there’s an African-American man threatening my life” and subsequently doing so. This was after he asked her to put her dog on a leash. You may have read about it.

The troubling story was overshadowed the next day, as it was the first in a wave of protests in response to police brutality and the killings of George Floyd, Ahmaud Arbery, Breonna Taylor, Tony McDade, and others.

#BlackBirdersWeek is a response to both of these events. It’s an inaugural, week-long initiative celebrating Black birders, explorers, and naturalists, peppered with collaborative online events like the #PostABird Challenge and a #BirdingWhileBlack livestream discussion. It culminates this Friday with a spotlight on #BlackWomenWhoBird.

The initiative is both a joyful sharing of passions for nature, and a testament to how natural spaces can be unwelcoming and directly threatening to Black people because of white gatekeepers. That extends to even the reception of #BlackBirdersWeek in some spaces: A post about the initiative was taken down by a Tennessee naturalist Facebook group because of the “potential for conflict.”

How did #BlackBirdersWeek come to be?

#BlackBirdersWeek came about as a response to the unfortunate event that happened with Christian Cooper and Amy Cooper in Central Park. The sad truth is that we can’t even organize for one Black trauma before another one happens.

This week is not just about Christian Cooper and Amy Cooper. It’s about other Black lives that are at risk, and those that have been murdered, including Breonna Taylor, Ahmaud Arbery, George Floyd, and countless others.

In the BlackAFInSTEM group chat, which was organized by Jason Ward, we began to share our experiences of being Black while birding because of the Christian Cooper incident. We shared our experiences there, and on Twitter, because we realized that this incident could have easily happened to anyone of us.

Belleny shares her experiences of being Black while birding.

One member of our group, Anna Gifty Opoku-Agyeman, recommended that we organize a way to spread awareness of our experiences while being outdoors. From there, #BlackBirdersWeek was born.

We posted our initiatives within two days — we were clearly inspired to make a change. I would wake up to just hundreds of messages in our group chat.

What would you say have been the reactions to this initiative so far?

It’s been nothing but love left and right. I’ve had a smile plastered on my face for days, and I’m sure that other Black people have also felt the same sense of community and the same happiness from seeing these beautiful Black faces and spaces where we belong.

What are the overarching goals of this initiative?

Black people who enjoy the outdoors are actively prevented from doing so. There are systemic barriers, especially racism.

We have these three main goals: We want to lift and recognize Black birders. This hobby is often seen as something that’s dominated by old white men, but there are so many Black birders out there. We want to provide them reassurance through the community.

Secondly, we want our non-Black peers to understand the experience of Black birders and Black outdoor enthusiasts. To understand that we often feel uncomfortable in spaces where we recreate and that discrimination prevents more people from joining and enjoying nature. The other half of this goal is that we want our professional organizations, our workplaces, our schools to be better at protecting their Black members. We are out here on our own trying to protect ourselves, and it’s tough. It’s really tough.

Our third and final goal is highlighting the importance of biological diversity — the idea that biological diversity is essential to create more resilient biological communities and strengthens the ecosystem. With that in mind, we want to advocate for diversity in birding — for people. We want people from all kinds of backgrounds involved in outdoor recreation. The outdoors is for everyone.

I have received so many messages from Black people who once felt isolated in their outdoor interests.

Hashtags like #BlackBirdersWeek and #BlackinNature allow people to easily see what people share. Could you speak to what this level of visibility achieves?

I definitely think that visibility is encouraging, and not just to older people who are online. I really think it’s encouraging young Black kids to be proud of their interests: That they’re not strange or weird for doing whatever outdoor activities that they’re shunned from.

I would also like to show my friends and family that there are so many other Black wildlife conservationists out there, and why it’s important that we have more of us in that field.

Photos shared by conservationist and ecologist Armand Cann on Twitter.

I hope this visibility inspires a new generation of Black birders: We know from experience that once you get someone hooked on birding, you can kind of slide them into broader ideas about conservation.

I also hope it helps people find a new release. We, as Black people who love the outdoors and nature, exist. There are so many of us. BlackAFinSTEM is helping that community come together, and new people are joining and finding a new way to recreate. I help run the BlackAFinSTEM Instagram page and have received so many messages from Black people who once felt isolated in their outdoor interests, or from people who are now going to start going outdoors more or starting birding because of this movement.

Honestly, it makes me emotional to read through those messages and be able to provide some reassurance, because I used to be that type of person. I used to be that same person with that feeling of isolation, of being very lonely in my field. I didn’t see very much representation until I joined the BlackAFinSTEM group.

What is your experience as a naturalist? What do you love about nature?

I’m a wildlife biologist from San Antonio, Texas. I’ve always loved being outdoors — I was known as the "bug girl" and the "animal girl" growing up. But I never really knew the names of the animals and plants I would find while exploring. I didn’t even know there were books that could help me identify those species. Furthermore, I didn’t even know that a job like a wildlife biologist even existed.

But through a series of happy accidents and a lot of hard work, I’ve found myself in a career field that I absolutely love. I had to change my major; I had to transfer schools — going from a city I really liked to a city that was in the middle of nowhere — but it’s been worth it.

Belleny shares her experience working with quails on Twitter.

It’s been rough and at times an isolating ride, but to be in the position of getting to say I’m an actual biologist, it’s really great. I’m paid to be curious about the planet, take a closer look at how and why natural systems function, and help heal the planet. Currently, I develop management strategies for species of conservation concern, ranging from Eastern box turtles to piping plovers.

Being in nature brings me back to that state of child-like wonder. It feels like I’m fulfilling my childhood dream. I think that’s what a lot of people search for, and I’ve actually found it.

I would definitely love for us to continue #BlackBirdersWeek in the coming years. Our group is so motivated, so talented, so passionate — I’m certain this week will happen again.

I’m also hoping that other celebrations of Black people and a range of topics will come. Our name is BlackAFinSTEM — not BlackAFinBirds. We want to showcase all kinds of experiences and backgrounds, and we’re excited to see that in the future — hopefully, very soon.