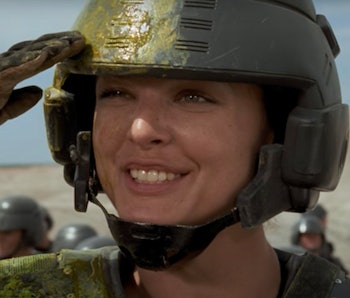 Sci-fi action movies are not created equal. While we all cheered when Luke Skywalker blew up the Empire’s superweapon and the hundreds of thousands of people on it, the militarism inherent in the genre is, as Ursula K. Le Guin pointed out in 1978, sometimes troubling. Long before brilliant sci-fi shows like Andor and For All Mankind began deconstructing military science fiction, 1997’s Starship Troopers blazed a trail for them.

Focusing on the exploits of sci-fi soldiers battling insectoid aliens from the planet Klendathu, Starship Troopers was an easy movie for the mainstream American public to misunderstand. In theory, we’re supposed to root for Johnny Rico (Casper Van Dien) and the rest of the mobile infantry as they fight the good fight.

But the brilliance of director Paul Verhoeven was that Starship Troopers was intended as a camp satire against mindless military recruitment. Because the film casually asserts the idea that only those who serve in the futuristic military are “real” citizens, it presents the ease at which fascist ideas could take over a mainstream democracy. As the film opens, Rasczak (Michael Ironside) lectures his students about the failures of pure democracy, championing the status quo of this future world.

The movie acted out the literal text of Starship Troopers, but with a critical subtext. What this did for people analyzing the literature of Robert A. Heinlein is perhaps irrelevant, but Starship Troopers broadly changed how people thought about sci-fi action movies.

In A New Hope, Luke dreams of “going to the academy.” He only remains an ethical person on accident, because he never has the chance to learn how to fly TIEs for the Empire. Starship Troopers is basically what would happen if Luke had joined the Empire, and had a grand old time advancing Imperial hegemony.

Today, we take for granted how self-critical the action sci-fi genre can be. Star Trek: Strange New Worlds frequently unpacks the ethics of Starfleet, while For All Mankind imagines an alternate timeline where a more robust space program is driven by a larger military build-up, including an arms race on the moon and Mars. Andor questions the motivations of both the Empire and the Rebel Alliance, and unpacks the moral failings of the people we thought were the “good guys.”

Other than some episodes of Babylon 5 and Deep Space Nine, it’s hard to find live-action sci-fi before Starship Troopers that meaningfully critiqued space militaries. And, if you’re only focused on mainstream American movies, that critical lens is non-existent. Although audiences largely misunderstood the critical and satirical elements of Starship Troopers in 1997, the fact that it existed at all was a huge milestone.

Starship Troopers showed that a big-budget sci-fi film could deliver action and special effects on a massive scale. It also proved that you could smuggle in a critical message without anyone noticing. The reason we’re still talking about Starship Troopers 25 years later isn’t just because we need to keep reminding people of its true message. The bigger picture is, that without Starship Troopers, it’s hard to imagine mainstream sci-fi on TV and in films taking bigger thematic risks, especially when it comes to wars fought in outer space.