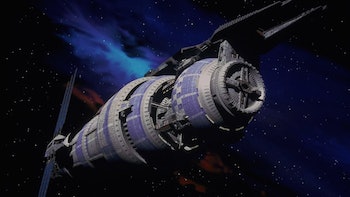 The last, best hope for a ‘90s sci-fi reboot is coming. However, before the new Babylon 5 reimagining hits The CW, another, much more mysterious Babylon 5 project is poised for released. Here’s what creator J. Michael Straczynski has revealed about the two upcoming Babylon 5 projects.

There are two new Babylon 5 projects

We’ve known for a while that The CW is developing a Babylon 5 reboot, but a recent tweet from prolific writer and sci-fi/comic book impresario Straczynski has clued us into a second project inspired by the beloved sci-fi TV show.

“B5 Project 1 is the reboot/reimagining for CW, which is awaiting a production order,” tweeted Straczynski on September 4. “Project 2 is the one we've been doing in secret with some of the cast. Until there's an official announcement, all of us are sworn to secrecy and can't tell you what it is or even what medium it's in (film/audio/video/game/print/semaphore), I can only tell you that it's done and has a '23 release date.” Interesting...

“The agonizing part is that, even though it's finished, the project won't be debuted until a big presentation at next year's San Diego Comic Con, after which it will be made available.”

Now that we’ve established some version of a new Babylon 5 will be released into the world in July 2023, who will participate? Straczynski confirmed that “all of the main B5 cast members still around participated.” This seemingly confirms:

Interestingly, as of now, there’s no way of knowing if all of these actors are playing versions of their previous Babylon 5 characters, or if they will be inhabiting different characters. In other words, Straczynski confirmed the return of Bruce Boxleitner, but we don’t yet know if that means the return of John Sheridan. It probably does, but just sayin’!

Either way, longtime fans of the cult classic show can rest easy knowing that this specific project will capture the spirit of the original series, which ran from 1994-1998. Without revealing anything about this project (again, it could be animated or audio) Straczynski said: “It's the closest thing to the original B5 in tone of anything we've done since. As if no time has passed at all.”

The secret Babylon 5 project comes out in July 2023. The CW reboot is in development.