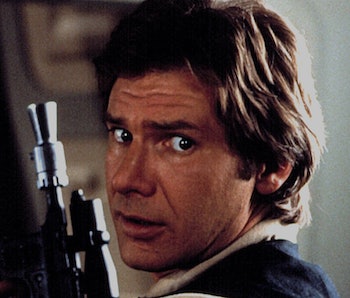 Punch it! The Millennium Falcon has made the jump into hyperspace and is traveling all the way back in time to glimpse Han Solo, Lando Calrissian, and Chewbacca in their younger days before the Rebellion. Though no trailer — or any footage, even — has been revealed to the public, a few lucky German fans have seen footage of the Han Solo movie and have described it as hitting all the cylinders of an old school Star Wars flick. Which means that the fan nostalgia wars are poised to begin again, but what does that even mean?

On Wednesday, a fan named Holger Frick posted on Facebook that he had seen footage of Solo: A Star Wars Story as part of a Disney press event in Germany. Frick described the footage as “awesome” and noted “it definitely had an ‘old’ Star Wars Feel to it.” Frick also said, “Looks like this could be the ‘fan-service-movie’ some of the older Star Wars fans wanted from Episode VIII.”

The idea that older Star Wars fans are disgruntled about various aspects of Star Wars: The Last Jedi rapidly became a talking point after the release of the film. This binary point of view presupposes that the only people who had misgivings about The Last Jedi are “fanboys” who supposedly dislike the direction of Luke Skywalker’s character arc, the prominence of various new characters, new aspects to the Force being suddenly introduced, etc. Obviously, this angry fan-service oriented stereotype is only made worse by gross incidents, such as the possible hacking of the Last Jedi audience score on Rotten Tomatoes and the recent sexist recut of the film. Elsewhere, fans and pundits are decrying the preponderance of nostalgia in the upcoming Han Solo movie, well before any footage has been seen.

However, all of this chatter seems to ignore that all Star Wars movies exist on a sliding scale of nostalgia in the first place. Including the original 1977 film.

In her 1978 essay about Star Wars, author Ursula K. Le Guin wondered “what is nostalgia doing in a science fiction movie?” Her point was simply that despite having an imaginative and somewhat complete sense of world-building, the narrative of Star Wars was reliant upon out-dated storylines and visual homages to WWII glorification. “When everyone gets into uniform,” is when the movie stops working for Le Guin.

Of course, the nostalgia that Le Guin was talking about in 1978 isn’t the same specific nostalgia people talk about now in reference to Star Wars. Le Guin meant that the film itself was creepily reliant on regressive values and — by borrowing Buck Rogers tropes — it actually glorified war in a movie that was supposedly against it. These days, the “fan service” people refer to about Star Wars just means Star Wars referencing itself with easter eggs to random aliens or stormtrooper helmets.

So, even though The Last Jedi may have seemed daring and progressive, that’s really only true by the standards of Star Wars itself, which are, since the beginning, hopelessly regressive and ethically confusing. Must we remind everyone again that the final heroic throne room scene in A New Hope is directly lifted from Nazi propaganda? This isn’t the General Hux nazi scene in The Force Awakens we’re talking about. This is the scene in which the good guys get medals and it’s shot just like a WWII pro-Nazi scene.

Here, in microcosm, is the only proof we need that talking about nostalgia in Star Wars movies is tricky. Was George Lucas nostalgic for Nazis? Well, kind of? I mean, without Nazis, Lucas couldn’t have made the Star Wars movies or Indiana Jones for that matter. We love watching Han Solo shoot space Nazis or Indiana Jones punch Nazis, but films which rely on these tropes are sort of in an intellectual deficit, to begin with. In the grand scheme of cinematic art that is challenging, progressive, and new, arguing whether or not the upcoming Han Solo movie is more or less nostalgic than The Last Jedi is really a case of splitting hairs.

Sure, in terms of easter eggs to the old films, Solo: A Star Wars Story will probably get further in the weeds in terms of what is called “fan service,” if only because it is another prequel. But, again, lauding the The Last Jedi for having fewer classic Star Wars easter eggs and shitting on the Han Solo movie ahead of time for having too many seems to be petty and miss a larger truth: these movies all rely on weird nostalgia for a variety of things.

Enjoying Star Wars movies at face value is getting more and more difficult because the zeitgeist is no longer talking about the movies themselves, but what the films represent in relation to the culture at large. But, now might be a good time for everyone to remember that the foundation of these movies isn’t exactly sound, so building ideological platitudes into our expectations is a dubious house of cards situation.

And when it comes to Star Wars, it might be best to leave the card playing to the cliche space pirates who scream “yee-haw” when they blow things up.