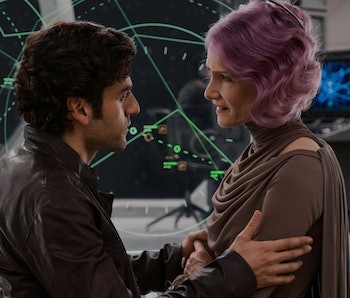 A Star Wars fan created edit of The Last Jedi that removes all of the women, and he’s getting predictably roasted online for creating what’s essentially just a low-quality chauvinist cut.

According to Pedestrian, an anonymous user uploaded a film called “The Last Jedi: De-Feminized Fanedit” to Pirate Bay on Sunday, referring to the person as an “MRA,” or “Men’s Rights Activist.” Just in case the video’s intent was unclear, the MRA in question also titled it “The Chauvinist Cut.”

Where would the new Star Wars movie be without its many powerful female figures? At least this one guy wants to know, because he’s so unhappy with The Last Jedi that he turned the 152-minute movie into a 46-minute episode of men doing things in space. The user describes the cut as “basically The Last Jedi minus Girlz Powah and other silly stuff.”

What does that translate to? There’s no Admiral Holdo at all, Kylo Ren kills Leia in a series of non-emo epic moments, and Rey’s powers are nerfed significantly, with heavy edits made to the epic Kylo and Rey team-up against Snoke’s guards: “Kylo takes on more of Snoke’s guards, Rey struggles with a single one.”

In this version, Kylo Ren “is more badass and much less conflicted and volatile,” inexplicably becoming the hero of the story despite literally assuming leadership of the First Order — which is already the Nazi regime of the Star Wars Universe to begin with. Every female character’s role is diminished or eliminated, with the description even going so far as to say, “No bomber heroism by china girl in the beginning.”

You can see the full list of cuts on Pirate Bay, but here’s the same list of bullet points:

Most responses on Reddit assumed this whole thing might be a joke because it’s so exaggerated, as if a MRA parody wrote up a list of asinine perspectives.

But sure enough, the many cuts promised are included in the file if you download it.

But the GIFs don’t have to be localized to that galaxy far, far away:

Watch out for cooties, everyone.

Some getting more savage than others:

Even Rian Johnson himself joined in, basically just to laugh at the person that edited this new version of the film:

Since release, The Last Jedi has endured mixed reviews, with a segment of fans rallying against director Rian Johnson’s controversial story that tarnishes Luke Skywalker’s legacy while showcasing an increasingly more diverse cast. Recall that in mid-December a supposed “hacker” took responsibility for The Last Jedi’s overwhelming negative Rotten Tomatoes score, saying he did it because he was tired of Disney “shov[ing] SJW messages down our throats.”

Director Rian Johnson is well aware of the ongoing controversy about his film, and stands by his decision to bring more diversity and worldly perspectives to the franchise:

Considering the fact that the chauvinist cut of The Last Jedi is barely longer than an episode of Mad Men, it just stands to reason that we need powerful, assertive women in the Star Wars franchise to keep the stories compelling.

The alternative is the emo führer Kylo Ren ruling the galaxy, and who would want that?