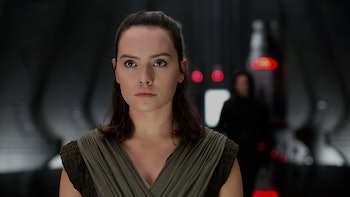 In December 2017, structurally, tonally, and thematically, The Last Jedi felt like a huge departure. Luke Skywalker was talking about this being the time “for the Jedi to end,” while Kylo Ren was encouraging everyone to ditch the nostalgia of the past, and “kill it, if you have to.”

There’s one rallying cry that’s repeated twice in The Last Jedi, that oddly, is probably the one thing everyone forgot about the movie: “Godspeed Rebels.” Uttered first by a doomed captain of a Resistance medical frigate, and then later by Admiral Holdo (Laura Dern), the phrase “Godspeed Rebels,” combined with several other mentions of “the Rebellion” as well as a huge Rebel Alliance insignia on the shoulder of Poe Dameron’s jacket, all added up to one result. The distinction between “the Resistance” introduced in The Force Awakens and “the Rebellion” from the classic trilogy was erased. The Rebels were just the Rebels again, and if you were confused, their logo was more prominent than ever.

While it's true that director Rian Johnson made several story decisions that scan as provocative after the fact, the larger status quo of The Last Jedi is closer to the classic trilogy than even The Force Awakens. In 2019, a sizable portion of the Star Wars fan base felt that shoehorning Palpatine into The Rise of Skywalker was a cheap trick. But the behavior of Snoke in The Last Jedi is so ridiculously similar to Palpatine in Return of the Jedi that it’s hard to rewatch the “the Throne Room” scene today and see anything other than a clever and artful homage to the Star Wars of 1983. This isn’t a bad thing, but to pretend like Rey’s belief in the “conflict” within Ben Solo/Kylo Ren was remotely original, and not simply lifted from Return of the Jedi is to deny reality.

In its dialogue, political status quo, and general story beats, The Last Jedi is very Star Wars-y, so much so that in an alternate universe, in which the TV series Star Wars: Andor was released before The Last Jedi, this film might have been accused of an excess of fan service. In fact, the transgressive nature of The Last Jedi is tiny compared to Andor. This is a movie where you have Yoda behaving just as he did in his first appearance in The Empire Strikes Back, to First Order walkers, to rickety speeders making a last stand on a forgotten planet, to a heist involving stolen data from the bad guys.

Before the internet was swiftly divided into camps about whether or not The Last Jedi was the worst Star Wars movie of all time or the best, there was a degree of nuance to the early reviews of the film. The New Yorker’s Richard Brody mostly praised the film but pointed out that so much of the structure of The Last Jedi relied on existing Star Wars tropes that even the twists felt muted. On the subject of Rey’s parentage, Brody wrote:

“Yes, the question of Rey’s identity, of her own sense of it, is ultimately applied to the movie’s plot. The bad news is that it’s stuck onto it, inconsequentially, to add a nub of psychological conflict; like so much else in the movie, it’s a conspicuously crafted, compulsory detail to stoke a preprogrammed response in viewers. Like most of the movie’s twists and details, it provokes the feeling of subjection to stimuli like a movie-theatre lab rat.”

But just after the movie was released, this kind of thing wasn’t really discussed intelligently at all. Because racist trolls harassed Kelly Marie Tran, and review-bombed the film on Rotten Tomatoes, any granular opinions about The Last Jedi that one might have were rendered pointless. Either you defended the entirety of The Last Jedi or you contributed to the far-right arguments of the trolls. This kind of response from fans acting in good faith made sense. In some ways, lionizing The Last Jedi in the face of such horrible racists was the only option. The flip side is that even for people who made the movie, it was difficult to discuss The Last Jedi on its own merits after it was out.

Before the film’s release, Rian Johnson and others were able to talk about the movie by just talking about the movie. Divorced from the fandom wars that followed, Johnson’s statements pre-release seem positively quaint now. For example, on the day the film came out, Inverse spoke to Johnson and said he felt like anything that felt like a big twist in the film was simply an “honest choice” when it came to the writing.

“The story decisions I made were 100 percent, completely organic,” Johnson told me in 2017. “I was never rubbing my hands saying, ‘How do I mess this up?’ or ‘how do I put this on its head?’ That was never the intent. My mission statement was to continue on from The Force Awakens.” And guess what? He totally accomplished that goal.

After the movie came out, the torrent of far-right trolling became the primary framework through which the film was discussed, which means, in a sense, the trolls won. Even if you loved the film, Johnson’s statement that he wasn’t trying to be transgressive and provocative didn’t even seem possible, partially because it didn’t fit with the (well-meaning) growing narrative that The Last Jedi was a transgressive film. And so, any fun and interesting fan discussions about The Last Jedi were put on hold.

But time has passed now. In the department of pushing back against Star Wars tropes, Andor is The Last Jedi on cocaine. Even elements of Obi-Wan Kenobi and The Book of Boba Fett seem to follow in the footsteps of The Last Jedi’s enduring theme: Anyone can be a hero, even if they’re not related to the Skywalkers. Since 2017, the Star Wars franchise has pumped out a myriad of stories, nearly all of which (other than The Rise of Skywalker) are less formulaic than The Last Jedi. The diversity of different types of Star Wars stories began in 2016 and 2017 with Rogue One and The Last Jedi but has expanded greatly since then.

Five years later, Star Wars has become even more radical since 2017. So, it’s possible that now, when it comes to the discourse of The Last Jedi, we can all heed Kylo Ren’s words of wisdom, and finally, finally, let the past die.

Star Wars: The Last Jedi is streaming on Disney+.