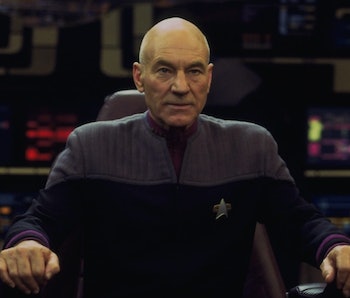 We may receive a portion of sales if you purchase a product through a link in this article.
Ryan Britt
Dec. 9, 2022

On December 9, 2002, Star Trek: Nemesis became the last movie to star the Next Generation crew, and the last Trek movie set in the original timeline. Derided as an unfitting sendoff, time has revealed that Nemesis laid the bedrock that Trek’s later shows and reboots would build on.

Backward letters and melting senators might be a weird way to begin a movie, but Nemesis decided to follow political assassinations with a hilarious wedding, all crammed into the first five minutes. Although there are plenty of criticisms one could make, calling Nemesis “slow” would be inaccurate. It starts at warp speed and doesn’t slow down, making even introspective character development moments feel rushed. And yet the shocking number of overlapping storylines are clear; in all of 21st-century sci-fi, Nemesis might be the most convoluted film that doesn’t actually ask much of its audience.

Whenever a mystery is set up in Nemesis, the question is answered within 10 minutes. Why is there a duplicate of Data (Brent Spiner)? Oh, it’s just a prototype of Data, built before Data, hence the name “B-4.” Why is there a young clone of Captain Picard (Tom Hardy) named Shinzon? Well, at one point the Romulans wanted to replace Picard with a clone, but they changed their mind, and Shinzon became a politically embarrassing leftover.

Nemesis has two Datas and two Picards, and in both cases the doppelgänger for the beloved Trek hero is presented as an incomplete person. B-4 is literally incomplete, so much so that when Data downloads his own memories into B-4’s brain, he doesn’t seem to act any different. Data is deflated, clearly disappointed that he once again won’t have anything in common with an android twin.

Meanwhile, Picard (Patrick Stewart) wants to help his younger copy, Shinzon (Tom Hardy), who reveals himself to be a psychopath hoarding weapons of mass destruction. In keeping with the rapid-fire plotting, this revelation happens just minutes after Picard has a hopeful dinner with Shinzon and warms to the idea that his dark mirror self might be okay. Nemesis never lets Picard or the audience sit with contradictory feelings. As soon as an emotional paradox is floated, it’s resolved.

This writing robs Tom Hardy of what could have been a truly wonderful performance. Any nuance or conflict that Hardy injects into Shinzon is steamrolled by the relentless plot. Which, essentially, is the weakness of Nemesis. For all the strong character work by the entire cast, the events of the movie push the good stuff to the fringes, making you wonder what you’re supposed to be focusing on.

But on paper, the ideas contained within Nemesis are great. Specifically, the notion of both Picard and Data facing disappointing doppelgängers is a good one. Had Nemesis been a two-part episode of The Next Generation, it may have even gone down as a classic. Because it’s been 20 years since the film hit theaters, the cast feels young and lively here, which is funny given that they were headed into retirement at the time.

Because Nemesis created the backstory for Picard, its influence is still keenly felt today. Lower Decks and Prodigy also have to look to the politics and status quo established in Nemesis, and Discovery Season 3 was impacted insofar as anything to do with the Romulans is still connected to what Nemesis set up. From space politics to starship designs, to how and when Data “died,” pieces of this film are strewn across modern Star Trek. Picard Season 3 will even bring all these characters together again for the first time since their muted 2002 farewell.

In Nemesis, Shinzon taunts Picard, telling him he won’t live to see “the victory of the echo over the voice.” But now, 20 years later, the echo of Nemesis is still pushing Trek forward. Even if later Trek projects, like the reboot films, were made as a counterattack on the tone and style of Nemesis, its existence was influential.

Today, it would be easy to tell the story of this film over six episodes of a streaming TV show. In 2002, Star Trek didn’t have this luxury. The only real crime Nemesis committed was that it was made at the wrong time.