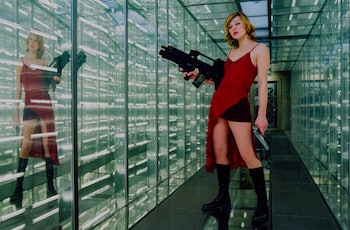 Everyone knows that zombie movies and evil AI movies fall into different sci-fi genre categories. But back in 2002, Resident Evil asked: what if they’re not? The original Resident Evil (2002) remains supremely rewatchable because it’s a fascinating example of how to mix movie genres and create a mainstream thrill ride in the process. The original film (and a handful of its sequels) just hit Netflix. Here’s why it’s a good time to revisit where it all started.

Although Paul W. S. Anderson adapted Resident Evil from the mega-popular video game of the same name, Milla Jovovich’s heroine Alice was specifically created for the movie. Fresh from her smash success in The Fifth Element, the entire reason Resident Evil works is that Jovovich sells it. (The actress would go on to play the iconic character in six films.)

Everything about this premise is wacky. Jovovich’s Alice is basically forced to just be in this plot because... reasons? Early in the first film, after Alice awakens in a mansion with memory loss, a side-slit red dress is laid out for her on a bed. This is kind of everything you need to know about the movie. The dress is like one of the bottles set out for Wonderland’s Alice, and you can’t imagine the story going any other way without it. (Side note: Was Alison Pill’s Borg Queen red dress in Picard Season 2 a visual homage to Jovovich fighting an evil AI? Almost certainly?)

The dress is the first sign of how plotting works in this movie. Characters are put in situations because the story needs them to be put there, and things happen because the plot is too propulsive to let the audience ask why. Alice’s work is cut out for her because so few of the characters actually make choices. Again, a slightly less committed performer would have turned all of this into a joke, but Jovovich — as well as Michelle Rodriguez, who plays Rain Ocampo — elevate the material to something more.

Both of these actresses would go on to be pigeonholed as action-movie badasses, but what everyone tends to forget is that, in order to become typecast, you have to be good at what you do. Why does the rogue AI (aka, the Red Queen) do what it does? Do the motivations make any sense? Jovovich, Rodriguez, and Colin Salmon give Resident Evil a veneer of cyberpunk plausibility, even if the actual genre driving the movie is slasher-flick.

This B-movie narrative structure is a feature of Resident Evil, not a bug. What makes the first film so easy to watch is just how quickly you can suspend your disbelief and allow the “mystery” of the movie to unfold. We’re told from the onset that the Umbrella Corporation makes its real money from creepy, top-secret experiments. Learning about the zombie results of those experiments is part of the horror, but also part of the fun.

As with the game, Resident Evil imagines a world where Apple or Amazon were also creating evil, incidental AIs by accident, training secret operatives, and accidentally making zombies. Considering the corruption in the real tech world, you could argue that, in terms of analogy, Resident Evil was way ahead of its time.

Infamously, the first Resident Evil slayed at the box office ($103 million against a budget of $33 million) but was panned by mainstream critics of the time. This curse persisted throughout the franchise, but one has to wonder if that’s only because of timing. The first Resident Evil film may not be a wonderful masterpiece, but it certainly holds up better than similar, more recent story arcs on Westworld, and the movie is more entertaining and compact than the new Resident Evil TV series.

On Rotten Tomatoes, the original movie holds a 33 percent to 67 percent split, meaning, that the historical metrics tell us that “real” critics hate the movie twice as much as a “mainstream” audience. But, anyone with even a cursory sense of the mainstreaming of sci-fi and horror in the past two decades, may suspect that Resident Evil wasn’t given a fair shake back in 2002. Its “bad” reputation is simply that: a reputation. If the Resident Evil movies were hitting theaters now instead of in the early aughts, they’d probably be better reviewed by today’s critics and audiences, who are more fluent in genre storytelling.

Some of what mainstream critics disliked about the films is what fans of the movies obviously love. These days, it’s hard to imagine sci-fi action making this much money at the box office and also getting critically panned. And if you rewatch Resident Evil now and just imagine it’s another new straight-to-Netflix horror, sci-fi movie, you’ll find yourself realizing it’s way better than most of its imitators.

In 2002, Resident Evil may have seemed derivative. But today, 20 years later, it's a revelation.