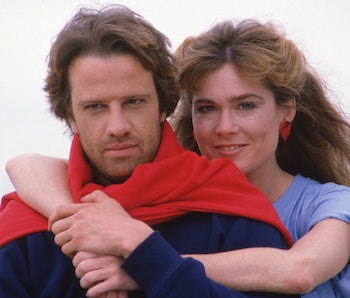 Christopher Lambert couldn’t speak English when he was cast in Highlander. This single detail not only perfectly explains his unique performance in the cult 1986 fantasy film, but it’s also a microcosm of the effective surrealism that Highlander probably achieved on accident.

Although Highlander concerns the machinations of secret immortals, the mortal stakes drive the movie. Lambert, a French actor born in New York and raised in Geneva, stars as Connor Macleod, a 16th-century Scotsman who discovers he cannot be slain. Before Highlander, Lambert was mostly known for Greystroke (1984), in which he played Tarzan, and the stylish Luc Besson thriller Subway (1985). Early in Highlander, when Connor is interrogated by New York City cops, one of them says, “You talk funny... where are you from?” When Connor replies, “Lots of different places,” Lambert could have been talking about himself.

Lambert’s performance encapsulates nearly everything about why Highlander is so interesting and misunderstood. The concept — the brainchild of screenwriter Gregory Widen — is simultaneously original and familiar. Ageless immortals walk the Earth, living “many secret lives,” and are occasionally compelled into swordfights. Thanks to legendary sword-fighting choreography from Bob Anderson, who worked on the original Star Wars trilogy, Highlander has a certain high-fantasy romanticism. In fact, if you don’t see echoes of The Empire Strikes Back in the final duel, you’re not paying attention.

But while Highlander evokes a throwback swashbuckling feeling, it also has a grisly edge that pushes it closer to horror. To dispatch an immortal, you have to cut off their head. Without spoiling who loses their noggin, Sean Connery and Clancy Brown co-star with Lambert as other immortals with their own agendas. Each gives career-defining performances here, and in the case of Brown, you can still see vestiges of his Highlander villain in his recent voice work in Tales of the Jedi.

But the heart and soul of the movie is Lambert. He began learning English after he was cast, a quirk that makes the movie more layered and interesting than it might have been with another actor. Lambert’s line delivery isn’t just brilliant, but convincing. You feel his isolation from the rest of the world because some of that isolation must have been real on set. You believe that he’s lived for centuries and been forced to continually contort his personality to match whatever the current status quo happens to be.

Lambert’s look also has a chameleon-like quality. Sometimes he seems like a deranged murderer who’s done everything possible to survive for centuries. Other times he’s a devil-may-care hero with a heart of gold. He doesn’t actually have that much dialogue, but what he does say is memorable. If Highlander were released today, an era where mainstream critics took genre films more seriously, you can imagine Lambert being nominated for awards. He’s that good in Highlander, a film with a strange and misunderstood legacy. The 1992 sequel is a bizarre mess, and by the mid-’90s, the TV version starring Adrian Paul became better known than the original.

But in the late ’80s, Highlander was a VHS success, and you can see why. Not only is it an original fantasy adventure, but it’s romantic at times. Roxanne Hart is refreshingly realistic as forensic examiner Brenda Wyatt. She’s not particularly glamorous, but she feels at home in 1980s NYC and creates a perfect foil for Connor. The script — written by Widen, Peter Bellwood, and Larry Ferguson — turns her into something of a Dr. Watson. The thrill of learning more about Connor Macleod and the immortals happens through Brenda’s point-of-view, grounding what would otherwise be a very unrealistic movie.

If you watch Highlander today, its most striking element is its arthouse look. Director Russell Mulcahy loves extreme contrast to the point of camp, and the movie famously opens as Connor is embedded in the audience of a trashy wrestling match in Madison Square Garden. It’s so ambitious and weird that it’s basically a litmus test for whether you’ll like the rest of the movie.

Adding to the atmosphere are several songs written for the movie by Queen, including a thrilling and confident opening romp, “Princes of the Universe.” It’s one thing for big Marvel movies to have great needle drops, but it’s something else when those drops are created for the movie. A proper movie soundtrack was never released, making Highlander a sort of forgotten Queen video album.

Thanks to Mulcahy’s style and Queen’s music, the aesthetic of Highlander — particularly in the New York scenes — is both gritty and ebullient. As Connor confronts another immortal in a parking garage early in the film, Lambert’s rumpled trenchcoat paired with jeans and white sneakers recalls a slightly more realistic Harrison Ford in Blade Runner, while oddly predicting the now-familiar style of another sci-fi immortal, David Tennant’s Doctor Who. There’s no reason to believe the sci-fi and fantasy that followed Highlander actively ripped it off, but so much of it seems familiar that it’s hard to believe it wasn’t more influential than it seems.

Highlander is seldom voted one of the best genre films of the ’80s, but it should be. Compared to Krull, Ladyhawke, and Conan, it’s an artistically bold film that blends genres messily and delightfully. When it comes to urban fantasy, there can be only one.

Highlander is streaming on HBO Max until December 31, 2022. It also streams on Peacock, Pluto, and Frevee.

More like this
Culture
Jan. 25, 2023
David Cronenberg made the best Stephen King adaptation you probably haven’t seen
By Jon O'Brien
Culture
Jan. 21, 2023
Steven Soderbergh’s only sci-fi film is also one of the century’s most underappreciated
By Mark Hill
Culture
Jan. 16, 2023
Nearly 20 years later, a Will Smith sci-fi movie feels like a warning
By Eric Francisco
Related Tags
Share: