“There can be only one.” 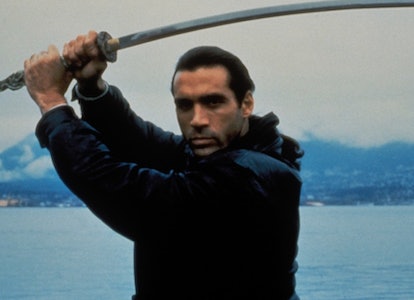 The Immortal Highlanders are from an alien planet. Or they’re from a distant, different dimension. Or... look, does anybody know why they’re immortal, really?

The loosely shared canon of the various Highlander films and TV series is an utterly hilarious study in make-it-up-as-you-go-along fantasy world-building. But it also scans as deadly serious. The most hilariously entertaining artifact from this era of ‘90s urban fantasy is the Highlander TV show starring Adrian Paul as Duncan MacLeod, the successor to Christopher Lambert’s Connor MacLeod from the cult 1986 movie and its troubled sequels.

The TV version of Highlander — and the movie that spawned it — are both streaming for free right now. Here’s why the series deserves a little love, and why its contradictory message — “there can be only one” — remains one of the most adorably shortsighted high-concept fantasy narratives ever.

What is The Highlander, anyway?

The concept of the Highlander franchise comes from the eponymous 1986 film in which it is revealed that Earth is secretly populated by a small group of immortal warriors who live among humans and are battling each other until only one is left.

The original film stars Christopher Lambert as Connor MacLeod, a Scottish guy who dies in the 16th century, only to learn he can’t be killed because he’s a member of this secret group of Immortals. Co-starring Sean Connery as the Obi-Wan Kenobi to Lambert’s Connor, Highlander introduces a ton of rules for the way Immortals fight and behave, including:

At the end of the first film, Connor wins the Prize, which enables him to commune with scientists and all sorts of people from around the world in order to foster the betterment of humankind. The franchise only gets wilder from there.

By the second film — Highlander 2: The Quickening — it’s revealed Immortals are aliens, which is useful because that way Connor can fight new Immortals in the distant future year of 2024. At this point in time, the Earth’s ozone layer is so bad that we’re all protected by a pink energy shield which Connor helped design. (This movie also stars Virginia Madsen in her second-best role ever, right beneath Sideways and right above the Star Trek: Voyager episode “Unforgettable.”)

But don’t get used to the new status quo. In 1994, Highlander 3: The Final Dimension retcons its predecessor. Even an eventual VHS release of Highlander 2 removes the alien elements to make it just seem like the Immortals come from different dimensions, or ancient times, or something. In the entire history of pop culture revisionism (The Hobbit, the Narina reading order, the 1997 Star Wars Special Editions, the Snyder Cut) the recut of Highlander 2 stands alone. Director Russell Mulcahy didn’t want to put more stuff in, he wanted to take stuff out.

The Highlander goes to television

When the Highlander franchise reached television, it tried to completely reboot the concept, complete with a different guy with the last name MacLeod: Duncan, played by Adrian Paul. But the show also desperately tried to fit itself into the “real” Highlander canon by having Christopher Lambert cameo in the very first episode.

To be clear, this cameo happens very early, exactly five minutes in. In the first episode — confusingly titled “The Gathering” — Connor introduces himself as being from the “same clan, but different vintage” than Duncan. If you were a hardcore Highlander fan in 1992 when this show came out, you’d have to accept the fact that two guys from the exact same village in Scotland randomly turned into Immortals about a century apart.

Although fantasy buffs will contend that Christopher Lambert’s Connor MacLeod is the only true Highlander, the truth is, from 1992 to 1998, Adrian Paul’s Duncan was the popular Highlander. If you hit up a gaming night, a comic book shop, or a sci-fi/fantasy convention in that decade, not seeing at least one dude wearing a shirt with Adrian Paul’s face would have been weird. In the year 2000, when it was time to make a fourth feature film in the Highlander franchise, the focus was on Duncan, with Connor fulfilling the role of the has-been Tony Stark in a movie appropriately titled Highlander: Endgame.

Buffy the Vampire Slayer began airing in 1997, just as Highlander was winding down. It’s easy to forget that before Buffy Summers, Duncan MacLeod was the premier TV hero of the week. Highlander primed mainstream TV audiences for soap-opera fantasy fare. Although the movies came first, the TV show Highlander remains the best iteration of this outrageous concept. If there can really be only one Highlander, then it should be the entire run of this cheesetastic, deadly earnest, and utterly entertaining show.

I can’t call Highlander: The Series a “classic,” but I can say the show’s charm is immortal.

All six seasons of Highlander: The Series are streaming for free on Peacock.

More like this
Entertainment
8.9.2022 1:00 PM
Has your favorite HBO Max show been canceled? The fate of 9 sci-fi series revealed
By Robin Bea
Entertainment
1 hour ago
Neil Gaiman teases a Sandman prequel on Netflix. Here's what that means.
By Mónica Marie Zorrilla
Entertainment
8.4.2022 7:00 AM
The Sandman release date, time, plot, cast, and trailer for Netflix's dark fantasy series
By Jeff Spry
Related Tags
Share: