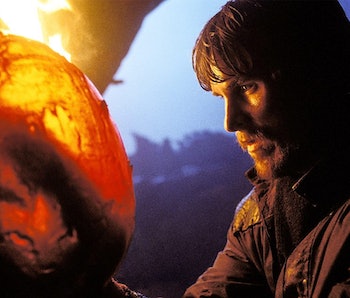 What movie is the quintessential post-apocalypse film? Is it a classic action thriller like Escape from New York or Mad Max, or something more modern and satirical like Don’t Look Up? Maybe there’s a supernatural twist to your favorite, like World War Z or I Am Legend. Well, this 2002 movie blends all three of those elements to make a product so incredibly “of its time” that somehow, 20 years later, it feels at once like a timeless experience and a time capsule to bygone era.

2002’s Reign of Fire was directed by Rob Bowman and stars Christian Bale, Gerard Butler, and Matthew McConaughey in roles so uniquely perfect for each of them that it’s almost difficult to believe. The movie follows Quinn (Bale), a miner’s son who narrowly escapes a mine after the workers discover a hidden dragon that immediately goes on a rampage.

Years later the dragons rule the Earth, while Quinn leads a small group of survivors in a medieval castle. Together with his sidekick Creedy (Butler) they raise a group of children, trying to cling to some semblance of hope as the likelihood of extinction grows more and more definite. Just when things seem the most dire, a tank rolls up to their castle. Out pops Denton Van Zan (McConaughey), a bald, bearded American military man who has a plan to wipe out all the dragons for good.

The showdown that follows is completely overlooked by movie history, but it’s one of the most exciting yet heartbreaking climaxes in a post-apocalyptic flick. Like any survival thriller, there are plenty of nail-biting moments and sacrifices that have to be made for the good of the human race. Without spoiling too much, don’t get attached to any of these characters.

While Reign of Fire is a pitch-perfect example of a post-apocalyptic thriller, there’s a definite 2002 quality throughout. Post-9/11 anxiety is rampant in all sorts of movies from this era, but the term is usually used to describe contemporary movies dealing with sudden shifts in the political climate. Reign of Fire processes this sociocultural anxiety with the distance afforded to it by such an inherently fantastical premise (but still a lot of American firepower). There’s a constant fear of invasion that’s understandable for a film released mere months after the world changed.

Reign of Fire makes no attempts to convince you that its characters are anything more than predictable archetypes. Such caricatures have sunk so many genre films in the past, but if anything, it enhances the inherent ridiculousness of this one. It almost feels like a myth people in the far-off future might tell, about how a ragtag group of survivors banded together to take down a menace that put the entire planet at risk. It’s an Arthurian legend, the hero in the castle facing off with the dragon, updated for the 21st century — for better or for worse.

Reign of Fire is a movie for those who miss the one-off adventures of old, when a premise could be established in the first 10 minutes and completely resolved within the next 90. It may not be the kind of movie we’ll see in our future, but it’s one imagining of the future that’s absolutely worth revisiting.

Reign of Fire is streaming on Hulu.