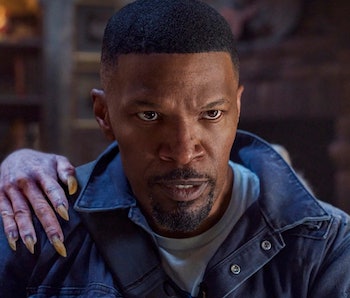 Hunting vampires is a bum grind if you’re faint of heart or strapped for cash. Imagine a nine to five that comprises gunning down ghouls in derelict bowling alleys as they feast on helpless animals; now imagine the same, but with the cost of braces and school tuition hanging over your head. Boiling your kid’s welfare down to a vial full of extracted fangs, sellable only to either the local vampire hunters’ union or a stingy pawnshop fence, takes all the fun out of the gig, but hey, it’s a living. Unless it kills you.

Day Shift, J.J. Perry’s new Netflix action-horror-comedy, pulls off several remarkable feats, but the most important is contextual: Directing from Tyler Tice and Shay Hatten’s screenplay, Perry reframes the classic vampire hunter trope from an elite calling into a working-class occupation. The movie doesn’t remove capital from the equation; killing creatures of the night takes gadgets, guns, a whole lot of ammo, and traditional wooden stakes. But Day Shift treats fancypants gear as a business expense, not a given.

It takes money to make money, but Day Shift only cares about the hustle. Bud Jablonski (Jamie Foxx) cleans pools as a front. Behind his Hawaiian print shirts and skimmers, he’s a seasoned vampire hunter stalking monsters in the San Fernando Valley. He’s also a proud papa to his dear daughter, Paige (Zion Broadnax), doting on her by indulging her fondness for froyo when he shows up late to after-school pickup.

But Paige’s mom, Bud’s ex-wife Jocelyn (Meagan Good), can’t keep up with payments for Paige’s private school and plans on relocating with her to Florida. Bud makes a deal: He’ll pony up the cash, and she’ll stay with Paige in San Fernando. It’ll take a whole lot of decapitated vampires to cut a private school check, so Bud chokes down his dignity and begs for reinstatement in the vampire hunter union.

Adding injury to insult, Audrey (Karla Souza), an ancient, malevolent vampire and ambitious real estate shark, is tracking Bud across the Valley, eager to satisfy a grudge against him. She’s also snapping up properties left and right as part of her scheme to remake the area into a vampire haven. Is it worse that Audrey’s a vulture, or that she’s a vampire? Bud has his work cut out for him either way, and Day Shift is all the better for its perspective on class.

Most vampire hunters either come from wealth or simply have bottomless pockets to facilitate the plot. Sometimes a movie like Stake Land comes along and makes the economy irrelevant, but the stereotype largely holds true. Blade, for instance, the granddaddy of modern vampire hunter films (and one Day Shift references directly), makes a sardonic tongue-in-cheek nod to funding, then drops the subject; the vampire hunter team in John Carpenter’s Vampires has the Vatican’s backing and resources; films like Horror of Dracula, The Kiss of the Vampire, Fright Night, and Buffy the Vampire Slayer either imply or outright display their protagonists’ affluence.

Bud doesn’t have that. He has the union and his stash of gear. Day Shift depicts Bud as a blue-collar sort with admittedly high skill requirements: calm under pressure, swift reflexes, peak physical fitness, deductive reasoning, steady aim, martial prowess, tactical knowhow, and a beefy sword-swinging arm. But no matter how much Day Shift relishes Bud’s badassery, the film stresses him as a working stiff who happens to be cool because that’s how he gets paid. The emphasis on the profile effectively cranks up fight coordinators Felix Betancourt and Eric Brown’s already jaw-dropping brawls to extraordinary levels.

Watching Foxx mow down vampires with his trusty shotgun and crash through walls is a pleasure. Foxx looks more like a movie star here than in most of his recent roles; he stares cool into every space he occupies, and only modulates that sensation when he’s around Paige or Jocelyn. With them, he’s just a man. Out in the field, whether he’s shadowed by Seth (Dave Franco), a union rep supervising Bud’s protocol, or strutting into the lion’s den with Big John (Snoop Dogg), a legendary vampire hunter packing a Gatling gun and cowboy magnetism, Bud is in charge. He’s unflappable.

Snoop, for the record, out-cools Foxx with a tip of his 10-gallon hat; the film doesn’t need a “who’s cooler” contest between these guys, but fair’s fair. The Doggfather wins, cutting a dauntless, larger-than-life figure who cries out for more movie roles. Whether doing action, horror, or comedy, Snoop commands the camera. But just like the contributions of Betancourt and Brown, the energy Snoop brings to Day Shift is heightened by the film’s labor grounding.

Every trick shot Adkins makes, every minatory stare Snoop levels at skittering vampiric hordes, every tightly-paced fistfight gets a boost from that essential detail. Day Shift does its share of world-building and mythologizing; vampires come in a handful of flavors, and once upon a time humans used to worship them. But all of that is window dressing. The movie values work first, acrobatic and gory action second, Franco’s comic relief third, and supernatural chatter last of all.