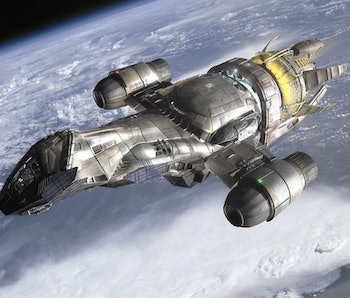 Space cowboys never tried quite as hard to be space cowboys as they did in this contentious cult sci-fi series.

20 years ago — on September 20, 2002 — this brainchild of Joss Whedon took a big swing at altering the sci-fi TV genre. And for nearly a decade after it was canceled, fans would tell you the show succeeded. But two decades later, the existence of Firefly isn’t revolutionary or profound. Instead, it occupies an odd place in science fiction history as both a much-discussed cultural touchstone and a blip between better sci-fi TV series.

On the show’s anniversary, let’s retrace the rise and fall of Firefly and its complex cultural legacy.

In the early to mid-aughts and into the 2010s, if you were in “geek” circles and you vocally disliked Firefly, you were shouted down pretty quickly. As a critic, if you mentioned that you disliked the dialogue in Firefly in an essay you published somewhere, Firefly fans would find you and send you rude emails. And by the time Joss Whedon directed The Avengers in 2012, the cult status of Firefly became unassailable. There were only two mainstream opinions available: either you worshiped at the altar of Whedon or you were an outcast.

But the flaws in Firefly were always there. For one thing, the casting makes zero sense when you consider the show’s world-building. The series takes place in a distant future where the U.S. and China merge to form a Union of Allied Planets. Chinese words are mixed in with English as a sort of futuristic slang. And yet, there are essentially zero Chinese people in the series.

It’s a weird flex to say you hated something before it was cool to hate it, and yet, the difference between 2012 and now is clear: Disliking Whedon’s writing — and his back chatty dialogue in specific — is not only acceptable but now has become a dominant view among various sci-fi/fantasy/superhero fandoms. This was not the case just ten years ago. People still loved Firefly so much in 2012 that everyone let Whedon make a version of Much Ado About Nothing starring two Firefly alums: Sean Maher and Nathan Fillion.

However you feel about Firefly’s dialogue, the signature cadence of a Whedon script made the series unique, and many sci-fi fans responded to that quality. Firefly aired just a year after the beginning of the least successful Star Trek series, 2001’s Enterprise, and nobody on Firefly talked like people on a Star Trek show. Babylon 5 was closer to Whedon’s more naturalistic approach, but it had been off the air since 1998. Firefly also predated 2003’s Battlestar Galactica reboot by one year, and the 2005 revival of Doctor Who by three years. In short, you could argue that science-fiction fans were starving for sci-fi TV in 2002 and Firefly was not only better than anyone expected but also, better than its biggest sci-fi “competitor.”

However, unlike Whedon’s most famous cult series — Buffy the Vampire Slayer — Firefly hasn’t aged well. The show’s intense interest in creating the Old West in space (regardless of if it makes sense within the story’s world) feels juvenile, especially by today’s post-Westworld standards. The fact that everyone is making a wisecrack may have felt like a revelation for sci-fi shows in 2002. But in the era of Marvel movie quips that Whedon helped launch, it feels played out. River Tam’s male-gazey vibe might have been contextualized as cool by pop culture progressives back then, but plays out as a bad fanboy trope now — especially given our shifted understanding of Whedon’s behavior behind the scenes.

So, what was Firefly good at? What is the positive legacy of the show, other than the cool spaceship design? This is an easy one: The actors are all pretty great. Nathan Fillion is perfect as a sugar-free Han Solo. Gina Torres is deeply underrated. Summer Glau does an admirable job of escaping various annoying Whedon tropes. Morena Baccarin is fun. And, of course, Alan Tudyk is reliably hilarious.

If you believe characters are bigger than the narratives they occupy, then the true power of Firefly was its ability to basically map various aspects of fandom obsessions pretty much on accident. For better or worse, those performances reflected something in sci-fi and fantasy fans of the time. In the end, the sky may have been taken from the crew of the Serenity, but for a brief moment, this gang of desperados captured the soul of science fiction.

Turns out, they just couldn’t keep it.