“The more we try to force equality, the more we’re creating a divide.” 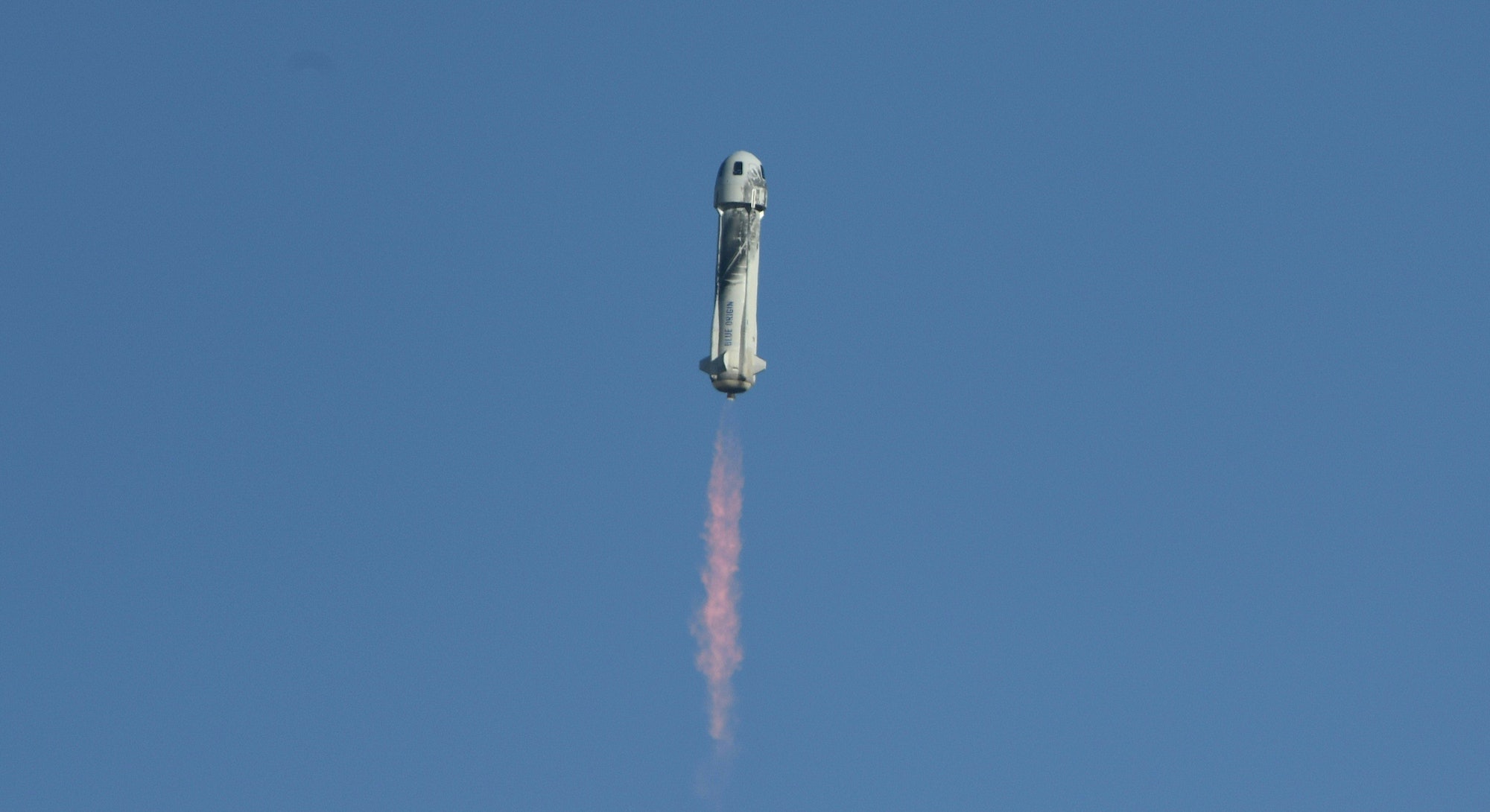 In the late 1970s, when Sally Ride was preparing to become the first American woman in space, that was the number NASA engineers estimated for something that was, apparently, more complex than rocket science: when sending a woman into outer space, how many tampons did she require? The number they settled on was 100 for a one-week flight.

The incident has retroactively gone somewhat viral (including inspiring a TikTok I can’t stop watching and continues to blow minds many decades later. It has such staying power, in part, because it’s hilariously absurd. But it’s also a particularly striking example of the institutional sexism women have long experienced in the space industry — a long history of alienation, the repercussions of which are still being felt.

The feelings women today have toward space travel are, of course, diverse and nuanced, but out of the people in my orbit, it’s my male friends who seemed to have the most interest in the latest space travel news.

And it was male-helmed mega-companies that spurred this surge in space travel. In July, Richard Branson launched himself into suborbital flight on a Virgin Galactic spacecraft. A week later, Jeff Bezos followed suit on a Blue Origin rocket. Elon Musk’s SpaceX launched the first all-civilian space flight in mid-September. Then, Bezos brought sci-fi to life by sending Captain Kirk himself, William Shatner, on a suborbital flight in October.

While women made their own history — as members of the first all-civilian space flight in September, and when Wang Yaping became the first Chinese woman astronaut to do a spacewalk on November 8 — men seemingly remain light years ahead in the gender space race.

Space, inherently, should interest all of us. We are literally made of stardust. There is, very likely, intelligent life elsewhere in the universe. Yet, while space feels deeply compelling to some, for many others it is unrelatable, inaccessible, and irrelevant.

To understand how the history of space flight may have contributed to this dynamic, Inverse spoke with Amy Shira Teitel, a spaceflight historian, and author of Fighting For Space: Two Pilots and Their Historic Battle for Female Spaceflight, a dual biography of two female aviators and their respective quests to become the first woman in space in the 1950s.

When billionaires began launching themselves towards the edge of space, I noticed a big gender divide in the upper echelons of space travel down to interest in my own friendship circle. As a space historian who is a woman, are you in the minority among your colleagues?

I am definitely in the minority. Space skews predominantly male, especially Apollo-era space history because that was the era when little boys growing up were being told, “You can be an astronaut, too!” Meanwhile, little girls were being told, “Well, you can be a secretary to the astronauts.” They didn’t have the same opportunities, because for a whole lot of reasons women weren’t qualified for the astronaut corps in the 1960s. So this generation of boys that grew up into men loving space kind of retained that, but women didn’t have that same experience and so didn’t have that same fascination.

What were some of the barriers preventing women from going into space during the Apollo era?

When NASA started looking at astronauts and the type of people that fly in space, they were asking themselves, “Who is this person? Are they a daredevil, are they a stuntman, are they a risk-taker?” And the closest earthly job to flying in space was a military test pilot. Because, at the time, no one knew what was going to happen to the human body in space, everything was new and experimental. The astronaut had to be someone who could tell the engineers on the ground what they were experiencing, so the engineers could interpret that and help make the plane better every time. So that was just a thing that, for NASA’s sake, was the safest, best thing it could do, and at the time, women couldn’t qualify to fly as military test pilots.

The thing that we always want to ignore is that we were in the middle of the Cold War. If the U.S. was going to beat the Soviet Union in this massive technological display of might, NASA had to do what was best for the program. They ultimately decided this was the best skill set, and there were no women who had the skill set. It’s not that it was discriminating against women, it was discriminating against 99.9% of Americans. There were great test pilots who didn’t have the right jet test experience who couldn’t qualify. They eventually became astronauts, but they couldn’t qualify in that era.

It wasn’t a matter of sexism, it was a matter of, “We’re in a war, you can’t react the way we need you to react.” It was less discriminatory, it was more that there were so many systemic barriers. So then the question is, could women have been military test pilots? Absolutely [if the military’s rules were different]. But the way the air force was structured at the time, they didn’t meet that basic requirement that NASA needed.

So, the gender barriers sort of trickled up.

Yeah, all the way up. A lot of it goes back to post-World War II, where even women that did have flying experience — whether they were civilian pilots or with the Women’s Airforce Service — didn't have combat experience. So when they were all coming back from the war, the men were getting the jobs. Men were more desirable for their safety records, for their experience. Women were constantly trying to play catch-up, and that went all the way to the top.

NASA took the first women astronauts in 1978, but they weren’t pilots, they were mission specialists. So really what changed is that NASA started allowing experts — doctors, other scientists that are pertinent to spaceflight — so there was no need for them to have that specific technical background of a pilot. Gradually that changed too. Now there are women test pilots and women pilot astronauts. Eileen Collins was the first female pilot, coming from the airforce, to command a mission, and that was in 1999. It took a while, but it was much bigger than just not wanting women in space.

Girls growing up in the late ‘80s, ‘90s, started to see women represented. You had Sally Ride. Christa McAuliffe was everywhere after the Challenger disaster. So in this next generation of young girls, you start to allow more interest. But I still think it’s something that’s not as acceptable, not as common.

So because women didn’t originally have the opportunity to go into space, it pushed some of them away from being interested in it, which affected future generations?

So there’s that part, but there’s also a bit of a cultural-social thing. We see it in everything: Girls that love science and math in grade school sort of drop off in high school. That interest that little girls have isn’t necessarily fostered, and they don’t necessarily keep that. Anecdotally, a lot of it seems to come down to: when girls start to want to date, they start to dumb themselves down to the boys they want to date, and they lose that interest.

There are a lot of things hitting women from all sides when it comes to anything space or science. They’re not told, “It’s cool to still like this.”

Did you ever feel society pushing you away from your interest in space?

I was definitely told that I didn’t have enough of a science brain in high school, so I wasn’t allowed to take physics or a high enough level of math to give me a high school math credit, which meant that I could not take any science except my one required science credit in undergrad. I had a lot of people tell me, “You’re very artistic, you probably don’t want to do anything in science.” So I ended up getting a degree in history of science because it was history but I could talk about science. I had a lot of people telling me, “Oh you like this stuff, but you’re not smart enough to do it.”

As we get closer to gender equality now, compared to the Apollo era you mentioned, do you think girls growing up today will become women who are more into space?

It’s a constant but slow shift. I have a lot of female friends who work at NASA. They just do what they love and what they love is space. They have a different experience because they’ve been fostered by teachers, mentors, whatever. I have friends who drive rovers on Mars — they’re badasses. Gender rarely comes into it.

The more we try to force equality, the more we’re creating a divide. I don’t know about you, but NASA’s verbiage in the Artemis Program of “Next man and first woman on the moon” sets my teeth on edge. Is the woman there because she’s qualified, or because she has a vagina? I feel like we keep drawing more attention to the efforts to include women, instead of just including women who are good at their jobs.

There’s such inequality in the domestic sphere. Despite advances in the workplace, women are still saddled with a lot more of the household work. Is there something to the idea that people who carry the mental load at home, which is generally women, just don’t have the mental energy to care about things like new SpaceX rockets?

It is true that women take on a lot more basic things like that. If space isn’t something you’re passionate about then why would you make space for it when you have more immediate things to worry about? I could definitely see not making mental space for a bunch of billionaires living out their fantasies going to space with action figure heroes. Joyriding in space, it’s a little weird.

What are your thoughts on the fact that all the civilian space flights this past summer were essentially spearheaded by rich men?

I mean, if you’re looking at Branson, Bezos, Musk, you have to kind of go back and look at what they did that gave them the opportunities to be as wealthy as they are. Women have also started businesses and become millionaires, but did them being men allow them to grow these empires?

Shatner going up in space is weird. It’s just like, why? On the one hand, I guess you could make the argument that if space tourism is going to become a thing, then the elderly will want to go up so you need to make sure it’s safe for grandma, but I don’t know. I think it’s Bezos wanting to go up to space with one of the Star Trek people.

If space is going to feel more inclusive and equitable for future generations, it seems like what we’re teaching and showing children right now matters a lot. So there needs to not only be more representation now but also opportunities for many diverse young people to pursue and learn about space.

Yeah, basically. I mean you look at social media, and you’ve got to look at the role models that are being raised up in front of these girls. You see girls going viral for doing a dance on TikTok, and all the other little girls are like, Oh I want to do that, as opposed to the girl who goes viral for talking about how cool her job in engineering is. Granted, one of those is probably better social media content. But we’re still bombarding young girls with a very specific image of what femininity is when it’s just being a woman, in whatever way you want to define it.