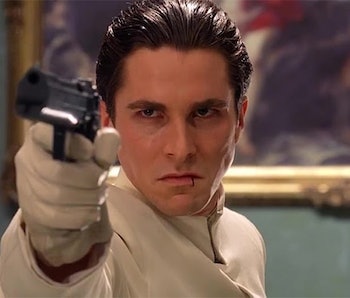 The idea that some forms of sci-fi oppression will outlaw our feelings is older than the genre. Even before the term “science fiction” existed, futuristic stories from H.G. Wells and Jules Verne dabbled in societies where emotions and thoughts are regulated. The pinnacle of an unemotional sci-fi race are the Vulcans in Star Trek, but in 2002 Christian Bale took Spock to school.

Equilibrium is remembered for two things: It tried to ride the coattails of The Matrix, and the gun-battling was pretty sweet. What gets left out of this analysis is that Christian Bale is fantastic, and he pulls off a feat that many science fiction actors have tried and failed to manage: to act like they’re emotionless.

In the pseudo-Orwellian future world of Equilibrium, a figure called “Father” controls everything, including how people are supposed to feel. Everyone is required to take a drug that limits their emotions and creative expression, and those who don’t comply are labeled “sense offenders.” The people who enforce these rules are dubbed Clerics.

The script from Kurt Wimmer lacks subtlety, which is why Bale as John Preston is such a revelation. This is Bale just two years after his layered and electric performance in American Psycho, and his intensity and nuanced performance far outshine Keanu Reeves in the original Matrix. The script may not be nearly as compelling, but as a by-the-numbers sci-fi flick, Bale carries Equilibrium much further than should be possible.

As in Logan’s Run or Fahrenheit 451, the enforcer of the unfair sci-fi law becomes an offender himself. This is where Bale unintentionally channels every robot-gone-beserk or repressed Vulcan story ever. The best thing about a sci-fi premise where a character has repressed emotions is the audience waiting to see everything explode. As Preston, Bale is a ticking time bomb, and when he goes off, the movie is endlessly watchable. Pretending to be someone with no feelings is one thing. But acting like a human pretending he has no feelings is something else.

The rest of the cast is great, too. From Taye Diggs to Emily Watson, the world of Equilibrium feels lived in, even if the production design isn’t groundbreaking. It’s the actors who sell this somewhat minimalist plot. In another universe, Equilibrium would have been a slightly muted episode of Black Mirror. But when a sci-fi wannabe blockbuster starts with Sean Bean dying, you know it’s not messing around.

Equilibrium hit theaters on Dec. 6, 2002, with a budget of $20 million. It only made $5 million back. That’s despite a positive review from Roger Ebert, who praised the film’s blend of cinematic action with moral philosophy, saying: “What I like is the sneaky way Kurt Wimmer’s movie advances its philosophy in between gun battles. It argues, if I am correct, that it is good to feel passion and lust, to love people and desire them, and to experience voluptuous pleasure through great works of music and art.”

Ebert was right. But what’s important is that all good science fiction about repressed emotions and oppressive societies argue the same thing. The reason why Star Trek fans love Spock isn’t that he has no feelings, but that his feelings are there, right under the surface, waiting to bust out. This trope is a trick, but it’s a smart one. And if you rewatch Equilibrium, and you aren’t impressed with Christian Bale’s serious attempt to embody this, well, then maybe you don’t have any feelings, either.

More like this
Culture
16 hours ago
A Lot of ‘80s Sci-fi is Dated. Videodrome Feels More Relevant Than Ever.
By Chrishaun Baker
Culture
Jan. 28, 2023
Sci-fi legend René Laloux’s final movie is his most opaque — and maybe his best
By Jake Kleinman
Culture
Jan. 25, 2023
Hansel & Gretel: Witch Hunters is a flashback to the strange excesses of 2013
By Mark Hill
LEARN SOMETHING NEW EVERY DAY.
Related Tags
Share: