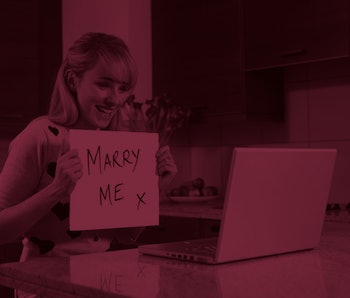 For those dipping their toes into the dating pool during stay-at-home orders, it’s been like swimming in a version of Netflix’s reality series “Love is Blind.”

In the show, contestants must get engaged before ever actually meeting one another in person. And while a lockdown engagement might be a bit extreme, it’s entirely possible that two people have grown to really like one another over the previous weeks and months. Maybe it started with a match on a dating app, followed by flirting over text. Then came regularly scheduled Zoom dates. Perhaps they’ve even started envisioning a future together.

Now, as states start to ease restrictions, some may have broached taking the next step: an in-person rendezvous.

What are the chances that their online connection will lead to true love?

In my book, The Science of Kissing, I describe how compatibility requires engaging all of our senses. And absent the touch, taste, and smell of a potential partner, people dating online during quarantine have essentially been flying blind.

Muzzled neurotransmitters — Human attraction involves the influence of cues that evolved over millions of years.

On a traditional date in a restaurant or movie theater, we actively gather details about someone by walking side by side, holding hands, hugging, and – if things get far enough – kissing. These experiences send neural impulses between the brain and body, stimulating tiny chemical messengers that affect how we feel. When two people are a good match, hormones and neurotransmitters bring about the sensations we might describe as being on a natural high or experiencing the exhilaration of butterflies. Finding love isn’t rocket science – it’s anatomy, endocrinology, and real chemistry.

One of the most important neurotransmitters involved in influencing our emotions is dopamine, responsible for craving and desire. This natural drug can be promoted through physical intimacy and leads to the addictive nature of a new relationship. Of course, dopamine is just one player in a chemical symphony that motivates behavior. Intimate encounters also promote the release of oxytocin, which creates a sense of attachment and affection, and epinephrine, which boosts our heart rate and reduces stress. There’s also a decrease in serotonin, which can lead to obsessive thoughts and feelings about the other person.

In fact, one study showed that people who report that they’ve just “fallen in love” have levels of serotonin similar to patients suffering from obsessive-compulsive disorder. This chemical cocktail can even lead to trouble sleeping or a loss of appetite – symptoms people often attribute to meeting “the one.”

Our noses also play a powerful role in who we fall for. The famous “sweaty t-shirt experiment” reported that a man’s natural scent may influence how women choose a partner. The women in the study nearly always expressed a preference for the odor of men who differed genetically from them in the immune response to disease. Scientists theorize that selecting someone with genetic diversity in this region, called the major histocompatibility complex, could be important for producing children with flexible and versatile immune systems.

A kiss can make or break it — While a man’s natural scent may not be something women consciously notice early on in a heterosexual relationship, getting up close and personal can serve as a kind of litmus test for a couple. A kiss puts two people nose to cheek, offering a reliable sample of smell and taste unrivaled by most other courtship rituals. Perhaps that’s one reason a 2007 University of Albany study reported that 59% of men and 66% of women have broken off a budding romance because of a bad first kiss.

Complicating matters, factors that typically grab our attention in person are less obvious to recognize in a witty profile or photo. Studies of online dating behavior reveal superficial features are correlated with the level of interest an individual receives. For example, short-haired women do not tend to get as much attention from men as those with long, straight hair, while men who report a height of six-foot-three or six-foot-four fare better than their peers at interacting with women. The initial focus on appearance promotes pairing based on characteristics that aren’t significant in lasting relationships, compared with more important factors for long-term compatibility, like intimacy and shared experiences.

Still, at a time when many of us are feeling more isolated than ever, online dating does offer some benefits. Quarantine has encouraged men and women to take additional time to learn about each other prior to the meeting, sparing the anxiety of rushed physical intimacy.

For some couples, a real-world date will kindle the spark that began online. Many others will realize they’re better suited as friends.

This article was originally published on The Conversation by Sheril Kirshenbaum at Michigan State University. Read the original article here.