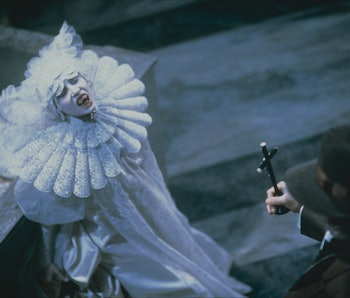 Think of Bram Stoker’s Dracula, and the first thing that comes to mind is likely Keanu Reeves’ abominable English accent. Perhaps that explains why Matthew Perry, seemingly unaware the star had transformed from a critical punching bag into a national treasure, questioned why the actor still walks among us.

It’s a shame Reeves and his considerate effort to let Dick Van Dyke off the hook has detracted from the film itself. The gothic horror, which celebrates its 30th anniversary this month, could well be the vampire’s finest big-screen outing.

Francis Ford Coppola ensured it was certainly the most visually stunning. The director, making his first scarefest since 1963 debut Dementia 13, was determined to create a Dracula film that looked like no other. He meticulously storyboarded almost every shot, created an animated film inspired by Gustav Klimt’s symbolist artwork and Jean Cocteau’s Beauty and the Beast to help production designers bring his vision to life, and encouraged the costume and make-up teams to go “weird.”

Both of the latter would receive Oscars for their ability to stick to the brief and reinvent the iconic vampire. Gone went the cliches of black capes, translucent skin, and widow’s peaks, and in came a blood-red kimono, copious amount of wrinkles, and a spectacular white beehive that defied the laws of gravity. And that was just for starters, as Gary Oldman’s teeth-sinking lead metamorphosizes into everything from a fornicating wolf to a Victorian Russell Brand during his reign of terror. No other Dracula has been required to show such range.

Coppola plays around with other vampire conventions just as casually. As seen in his slightly warped meet-cute with Winona Ryder’s Mina, the younger, dandier version of Dracula can wander around London in broad daylight, his UV shades and top hat the only protection he needs from the sun’s rays. Coppola also established some of his own conventions: Whether it’s the topless coven of brides who seduce Reeves’ solicitor Jonathan Harker, or the constant orgasmic moans of infected ingenue Lucy (Sadie Frost), Dracula's rampant horniness has informed everything from the slithering eroticism of Queen of the Damned to the inter-species coitus of True Blood.

In any other adaptation, Oldman’s shapeshifting, scenery-chewing performance would swallow the film whole. But press pause at any moment, and you’re struck by how much else there is for your senses to feast on. Cinematographer Michael Ballhaus draws on long-defunct techniques to bathe the movie in a shadowy eeriness reminiscent of the days when Nosferatu was giving cinemagoers the heebie-jeebies. There’s also an out-of-time quality to the visual effects, with Coppola firing the original tech-reliant team in favor of an old-school practical approach guided by his son, Roman: See how Dracula’s war experiences are depicted via shadow puppet theatrics as an example. Bram Stoker’s Dracula not only faithfully recreates the era of the 1897 novel, but almost looks like it could have been made back then.

Other than the blatantly miscast Reeves, the star-studded ensemble matches the grandeur of the visuals, with fabulously overblown performances played to the rafters. Coming off the back of stiff-upper-lip period piece Howards End, Anthony Hopkins appears to be having a ball as gung-ho vampire slayer Van Helsing, spouting lines like “We’ve all become God’s madmen, all of us” with unabashed glee.

Elsewhere, Tom Waits makes another memorable Coppola cameo as a former lawyer whose previous dealings with Dracula turned him into an insect-devouring asylum patient. Richard E. Grant, never one for understatement, hams it up as tormented administrator Dr. Seward, while Ryder brings the bodice-ripping energy as the schoolmistress torn between Reeves’ dull lawyer and the vampire convinced she’s his reincarnated wife.

It was actually Ryder who encouraged the director to tackle the source material that had already been adapted approximately 200 times before, as the actress had fallen in love with how James V. Hart’s script expanded upon the undead love triangle. Famously, Ryder and Oldman didn’t get along during filming, but it’s Mina and Dracula’s relationship, a concoction of repulsion, repression, and tragic romance, which diffuses any accusations of style over substance.

Sure, Coppola is undoubtedly more focused on spectacle than anything else. Returning warlord Dracula’s heartbreak at discovering his lover has committed suicide in the opening scene, for instance, is overshadowed by all the chapel-smashing and blood-drinking that follows. But he also finds the time to capture the pathos of a self-loathing being doomed to roam the earth until he can reclaim his lost love.

Bram Stoker’s Dracula proved to be the last hurrah for a man who’d just completed arguably the greatest film trilogy of all time. No one is putting Jack, The Rainmaker, or Youth Without Youth on their best of Coppola lists. Despite naysayers predicting the $40 million picture would become the next Bonfire of the Vanities (or Bonfire of the Vampires, as the press joked), Dracula topped the box office on its way to a $215 million gross.

As proven by monster flops Dracula Untold, Dracula 2000, and Dracula 3D, all of which could “cross oceans of time” without ever replicating Coppola’s brilliantly over-the-top spirit, that’s no mean feat. And they didn’t have a Keanu-shaped albatross around their vampire-bitten necks to contend with either.