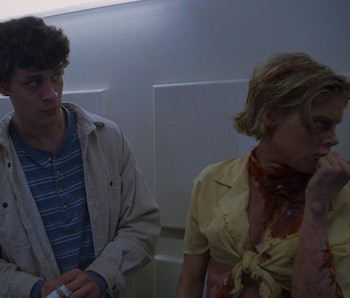 Following An American Werewolf in London was always going to be a task of monstrous proportions. John Landis’ 1981 hit was that rare horror comedy that actually pulled off both the horror and the comedy, put makeup on the Oscars map, and developed the kind of cult status that only the foolhardy would dare mess with. Yet that didn’t stop more than a dozen screenwriters and directors, including Landis himself, from giving it a go.

Stuck in development hell for much of the ‘90s, An American Werewolf in Paris finally made it into theaters 16 years after the original. That explains why instead of two clean-cut, middle-class hikers, the film’s travelers are a trio of thrill-seeking bros who seem to have escaped from MTV’s Spring Break. Vince Vieluf’s Brad and Phil Buckman’s Chris, in particular, are so obnoxious with their opening scene talk of “sex points” that you immediately start praying for them to get mauled by a wild-eyed lycanthrope.

Thankfully, their other traveling companion is a little more likable. Andy McDermott (Tom Everett Scott, recapturing the nice guy charm of his breakthrough performance in That Thing You Do!) also becomes an instant hero after saving Julie Delpy’s suicidal Sérafine from getting splattered below the Eiffel Tower with a quick-thinking bungee jump.

This dramatic meet-cute sets the Parisian tale on a more romantic path than its earlier visions. Landis wanted to center the sequel on an investigation into the tragic deaths of David Naughton and Griffin Dunne’s backpackers, bailing on the project when Polygram snubbed his first draft. John Lafia’s (Child’s Play) concept of a turned schoolteacher trailed by the original’s Dr. Hirsch was also reportedly turned down, and then Tom Stern was briefly appointed to helm a story about a tourist whose uncle falls victim to a mysterious critter. The latter, however, did receive a screenwriting credit alongside collaborator Tim Burns and Anthony Waller, the man who replaced Marco Brambilla (Demolition Man) in the director’s chair.

Sérafine and Andy’s love story is hampered by the fact that Delpy – who’d just starred in perhaps the decade’s finest transatlantic big-screen romance, Before Sunrise – and Scott share zero chemistry. Even when the Parisian gratuitously goes topless while straddling the American in bed, the pair still look like they’d rather be feasting on human heart smoothies.

Of course, the two unconvincing lovebirds do get to enjoy some liquified flesh: By this point, it’s been revealed that Sérafine starts growing fangs and an inordinate amount of body hair whenever there’s a full moon. Andy, meanwhile, is just learning that the mutant that bit him the night before has handed him the same fate.

You might expect that Andy’s metamorphosis from mild-mannered human into uncontrollable, all-devouring beast would be the one area that An American Werewolf in Paris improves on its London-based counterpart. Although Rick Baker’s prosthetics astounded at the time, deservedly picking up the inaugural Academy Award for Best Make-Up and Effects, they’d inevitably become dated. But the over-reliance on shoddy CGI renders the sequel’s transformations entirely unconvincing: The victims always look like they’re being attacked by a PS1 monster rather than a flesh-and-blood creature.

Waller, whose more impressive 1995 directorial debut, Mute Witness, had ironically focused on a horror movie makeup artist, is far more successful inducing laughs than scares. Future Modern Family star Julie Bowen gets many of the best lines as Andy’s first slay, Amy, an amusingly annoying airhead who returns to haunt her killer in rotting zombie form (“It took me four years on a Stairmaster to get a package like this. You ripped through it like a lamb chop!”).

He also makes interesting use of the Gallic setting, largely eschewing the more obvious reference points for lesser-known landmarks. Before ripping her to shreds, Andy gets carnal with Amy at Pere Lachaise cemetery (and, no doubt to the horror of Doors fans, specifically on Jim Morrison’s grave). Later, we descend into the labyrinthian catacombs of the capital’s underground.

Disappointingly, Waller also eschews the sucker punch that had 1981 audiences leaving the cinema shell-shocked for a much happier ending. Whereas An American Werewolf in London concluded with its lupine antihero dying in his lover’s arms, its follow-up concludes with Andy and Sérafine — both presumably cured — getting hitched atop the Statue of Liberty.

The drastic change in tone, and the lack of any real ties to its predecessor, means the movie is only a sequel in name. Even this brand recognition couldn’t tempt many to their nearest multiplex: Paris entered the domestic box office chart at a lowly seven, grossing only $2.3 million more than notorious flop Mr. Magoo. Landis twisted the knife when he remarked, “I was really disappointed when I saw that film, I thought it was lousy.”

Lousy is a little too harsh for a film that occasionally shows flickers of the original’s lunar lunacy. But it undoubtedly tainted a genre classic which, despite a much earlier inception, still feels more evolved.

More like this
Culture
Jan. 14, 2023
How Piranha 3D defied the curse of bad 3D movies
By Jon O'Brien
Culture
Jan. 13, 2023
How Jake Gyllenhaal and Ryan Reynolds made a shockingly good Alien ripoff
By Josh Bell
Culture
Jan. 15, 2023
Everyone remembers Twilight, but a better vampire movie rode its sparkling coattails
By Ryan Britt
LEARN SOMETHING NEW EVERY DAY.
Related Tags
Share: