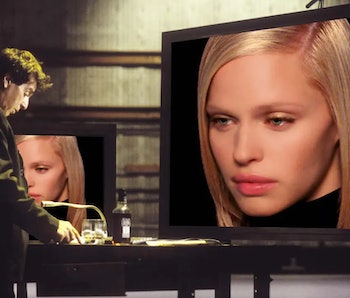 In 2018, Instagram personality Lil Miquela joined the likes of Rihanna, Kylie Jenner, and Donald Trump on Time’s list of “25 Most Influential People on the Internet.” One of those four is not like the other. And we’re not talking about the FBI’s current person of interest, either.

But could a forgotten, and largely derided, Al Pacino satire have given her creators ideas?

The concept of the virtual celebrity existed long before S1M0NE hit cinemas in 2002. Just a year earlier, Final Fantasy’s scientist Aki Ross had appeared, bikini-clad, on the front cover of Maxim to promote the video game phenomenon’s ill-fated foray onto the big screen. And who can forget the ultimate ‘80s cyberpunk TV host Max Headroom? (Despite his glitchy appearance, the character wasn’t actually computer-generated, but rather actor Matt Frewer in full prosthetics.)

However, writer/director Andrew Niccol’s follow-up to Gattaca, a more chilling look at achieving human perfection through technology, was perhaps the first film to explore whether a CGI creation could pass specifically as a Hollywood human.

S1M0NE stars Pacino as Viktor Taransky, a washed-up film director whose latest attempt to restore his former glories goes awry when its demanding star (Winona Ryder, in full-on “all cherry Mike and Ikes must be removed” mode) suddenly quits. Contractually unable to improvise with already-shot footage or to digitally super-impose her features on a body double a la Brandon Lee in The Crow, Taransky is facing a costly reshoot. Until, that is, he’s ambushed by a terminally ill former colleague (Elias Koteas) brandishing a computer program which has the potential to change the art of moviemaking forever.

Fast forward nine months, and a woman “two parts Madonna, two parts Julia Roberts and one part Princess Di, with the body of Sophia Loren and the charm of Grace Kelly” has both critics and audiences eating out of the palm of her hand. Just like the rest of her, however, that hand is composed entirely of ones and zeroes. And Taransky is determined to hoodwink the public into thinking she’s simply a plucked-from-obscurity new talent instead of a computer simulation.

Interestingly, that’s exactly the reverse of the marketing tactic New Line Cinema deployed ahead of the film’s release. In a stunt that wouldn’t have had any legs once Google had become a verb, the studio initially claimed S1M0NE’s leading lady was a digital creation and not Rachel Roberts, a Canadian Victoria’s Secret model who would go on to marry Niccol. To further maintain the illusion, the first-time thespian was banned from doing any press and even telling her own family about the role: the credits also read “Simone as herself.”

Yet, while the cat was eventually let out of the bag in the real world, Simone’s identity in the film somehow remains a closely guarded secret. Taransky only allows his new protégé to be interviewed via satellite and her absence from everyday life is explained with the excuse that she’s a recluse. In one of his most underrated comic performances, Pacino, who would go on to receive the digital treatment himself in the de-aging for The Irishman, appears to be having a ball keeping up pretenses: see the Home Alone-esque scene in which he fools the press with some Ken and Barbie shadow puppetry or the staged paparazzi shoot in which he bundles a Simone-obsessed lookalike into a hotel.

It's just as much fun watching the narcissistic filmmaker’s attempts to sabotage his creation once she begins to take the limelight away from his talents. Taransky, who controls Simone’s words and movements from an abandoned studio lot, soon turns the girl-next-door into the kind of foul-mouthed, chain-smoking, right-wing nut that wouldn’t seem out of place on Fox News. In an eerily prescient interview, she champions arming kids (“I just think all elementary schools should have a firing range. How else will the children learn to defend themselves?”) and denies climate change (“If there is a hole in the ozone layer, how come I can't see it?”).

Yes, S1M0NE appears to foreshadow the rise of fake news, conspiracy theories, and anti-woke commentary just as much as it does virtual fame. Much to Taransky’s aghast, Simone isn’t blacklisted for her ill-informed views but rather heralded as a champion of free speech. And, even when he comes clean about her lack of physical form (having eliminated Simone with a computer virus and then by dumping her hard drive in the sea), police instead believe they’re dealing with a cold-blooded murderer.

Taransky is soon exonerated. Thanks to some convenient tech knowhow from his ex-wife Elaine (Catherine Keener) and daughter Lainey (Evan Rachel Wood), Simone is rebooted and given a fake baby – a deflecting tactic which some believe has since crossed over into the real celebrity world – to explain her absence.

S1M0NE’s remarkably accurate crystal ball also seems to predict the advent of the kind of concert that has brought the likes of Tupac and Whitney “back from the dead,” and given the very-much-alive ABBA the chance to perform a London residency without ever stepping foot on stage: Simone proves she’s a double threat by singing “live” at a stadium show in holograph form.

Despite the best efforts of Jason Schwartzman and Pruitt Taylor Vince’s bumbling detectives, Taransky manages to get away with all of his trickery. In fact, the film concludes with the puppet master pushing his luck even further: beating Black Mirror’s similarly themed “The Waldo Moment” to the punch by a good decade, Simone announces she’s moving into public office.

It's a shame the lukewarm critical and public reception put pay to any White House-bound sequel. S1M0NE is undoubtedly the fluffiest of Niccol’s technological musings. Nevertheless, few other industry satires have possessed such an uncanny ability to predict where the fame game is heading. If Time was to retroactively publish a 2002 influencer list, Simone deserves to be at the very top.

More like this
Culture
Sep. 18, 2022
You need to watch the sexiest sci-fi thriller of all time on Amazon Prime ASAP
By Andy Crump
Culture
Sep. 29, 2022
10 years ago, we got a perfect time travel movie — with one big plot hole
By Ryan Britt
Culture
Sep. 25, 2022
35 years ago, the most obscure sci-fi movie tried (and failed) to redefine alien cinema
By Jon O'Brien
Related Tags
Share: