“We now have discrimination down to a science.” 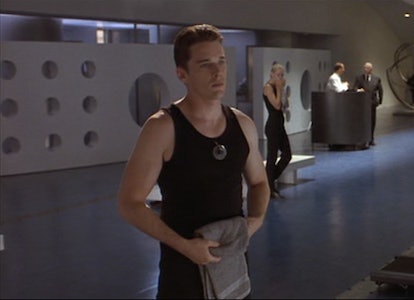 Genetic manipulation and controlling our genes are just a couple of common ideas in science fiction that are often the basis for dystopian nightmares. Director Andrew Niccol takes a more contemplative approach to the subject in his fascinating feature debut, in which genetic determinism is a source of melancholy and longing, and wider societal considerations are primarily left in the margins.

Best known as the screenwriter of The Truman Show, Niccol has a knack for coming up with high-concept sci-fi worlds. Although none are as fully realized and emotionally affecting as the one he creates in Gattaca, which just returned to Netflix this month.

Genetic engineering has enabled people to customize their offspring in Gattaca’s “the not too distant future.” It also has eliminated the propensity for disease and mental illness, enhancing natural physical and intellectual strengths. This genetic manipulation has led to a caste system divided between the “valid” genetically enhanced people and the “in-valid” people conceived via natural means.

“We now have discrimination down to a science,” explains Vincent Freeman (Ethan Hawke) in his opening narration.

Vincent is one of the so-called free births, an in-valid who was conceived out of love and was immediately doomed to a life expectancy of only 30 years upon being born. But Vincent is determined to rise above his predetermined station after spending a childhood in the shadow of his genetically engineered younger brother Anton. As adolescents, Vincent and Anton would play a dangerous game of chicken, seeing which one could swim further out to sea before turning back. As an adult, Vincent plays his own version of that game, pushing the limits of what he can accomplish as an infiltrator among the genetically superior.

Ever since he was a child, Vincent has dreamed of traveling to space, but no in-valid can ever be considered for a job as an astronaut. To get his foot in the door at Gattaca, the space agency, he pays a black market dealer to connect him with one of the valid who’s fallen on hard times. Jerome Morrow (Jude Law) is proof that near-perfect genetics don’t guarantee a near-perfect life. The onetime champion swimmer is now paralyzed from the waist down after being hit by a car. He smokes, drinks, and wallows in self-pity, and he’s more than willing to sell his identity to Vincent.

There’s a Dickensian quality to the swapping of identities between Vincent and Jerome, as the poor urchin from the wrong side of the genetic tracks poses as a child of carefully engineered privilege. Jerome provides Vincent with his various bodily secretions, from blood and urine used to pass the daily genetic screenings at Gattaca to hair and nails and skin flakes for Vincent to discreetly sprinkle around his workstation so that Jerome’s remnants can always be detected. Vincent, meanwhile, has to literally scrub away his identity, shaving his body and scouring his skin with an abrasive pad so that he doesn’t accidentally shed some part of himself in the wrong place.

When one of Vincent’s Gattaca supervisors is murdered, the police presence at the agency threatens to expose the pair’s carefully crafted ruse. This happens just days before Vincent is set to embark on a yearlong mission to Saturn’s moon Titan.

As noticed by his thoughtful co-worker Irene (Uma Thurman), Vincent watches every rocket launch at Gattaca, but space travel is more of an abstract goal in Niccol’s film. There’s never any discussion of the purpose of Vincent’s mission or the agency’s larger goals. It’s more a symbol of Vincent’s ultimate ability to transcend his limitations, breaking free of a planet where he’s forever considered unworthy.

Hawke’s wistful narration adds to the movie’s sense of poetic longing. As much care as Niccol puts into the details of genetic testing, Gattaca never gets hung up on scientific jargon. What’s important about Vincent is his soul, not his genes, which goes for the movie as well.

Niccol creates a 1950s-style retro-futuristic world of vintage-looking electric cars and cops in fedoras and trench coats. When Vincent and Irene go out on the town, they attend a classical piano concert (given by a pianist with 12 fingers) and dance at a smoky jazz club. The old-fashioned style reflects the regressiveness of this future society’s values, and the impeccable cinematography and production design make that society feel improbably real.

“No one exceeds his potential,” says the director of missions at Gattaca (played by Gore Vidal) with the certainty of a man who will inevitably be proven wrong. As much as it’s about the dangers of genetic engineering, Gattaca is about the value of dreaming, setting impossible goals, and then surprising yourself by achieving them. Vincent engages in an elaborate fraud to gain employment at an impenetrable corporation. Still, it’s all in service of that single, indescribable moment when he can find himself among the stars.

Gattaca is now streaming on Netflix.