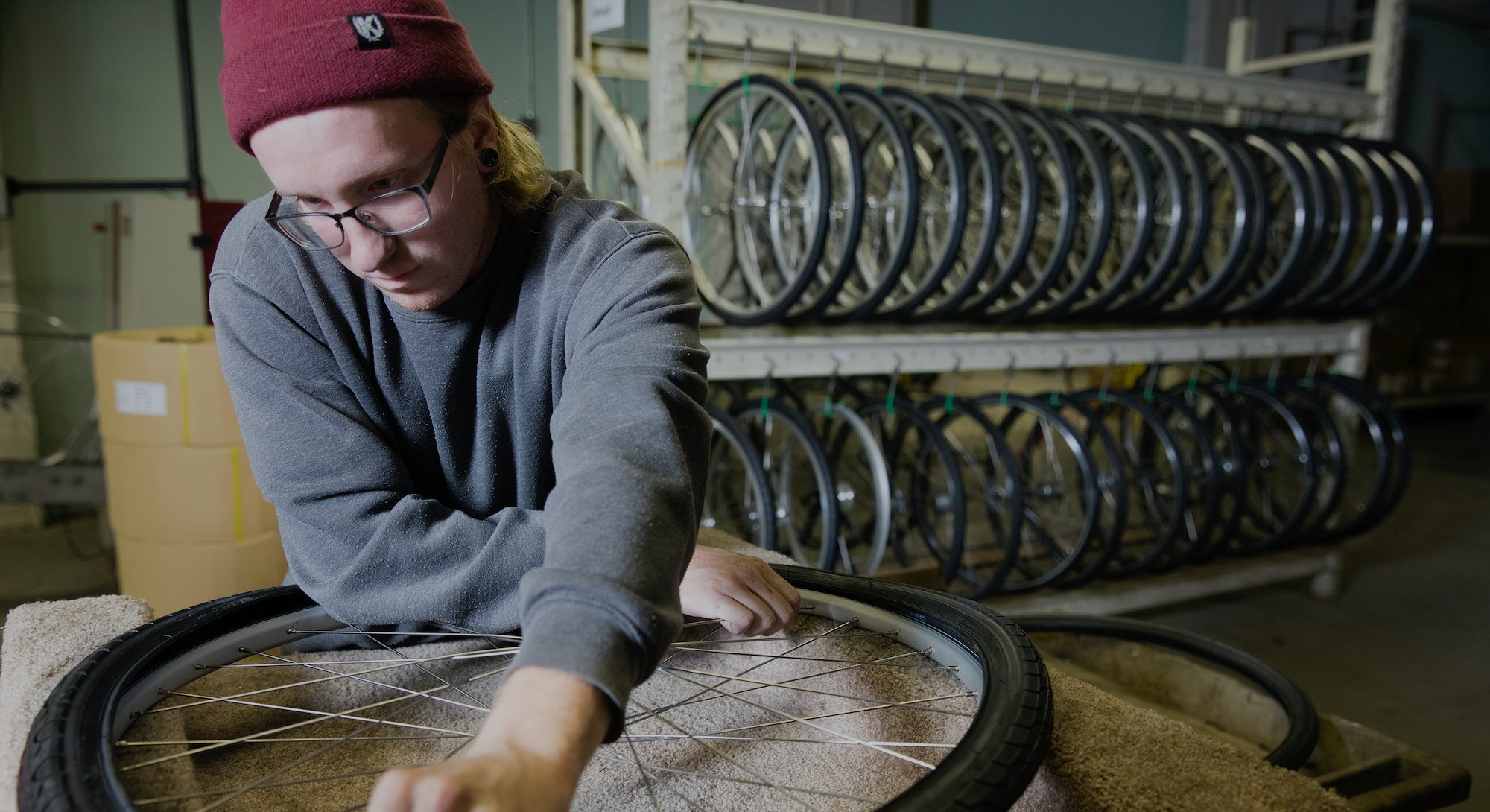 Zak Pashak is certain that America’s love affair with cars is coming to an end.

“There’s a problem with cars that society hasn’t quite come to grips with yet, but its starting to,” he says, sitting in a modest boardroom inside a warehouse in west Detroit.

The founder of Detroit Bikes has spent a lot of time considering shifting attitudes toward the gas guzzler. “Young people aren’t getting driver’s licenses anymore, there’s a lot more availability of transportation without a car, and ride share has been a huge thing,” he says. “I think we’re going to get away from a society where people need to own their own vehicle.”

Pashak hopes that the coming mobility revolution — forecasted by many, including Mark Fields, CEO of Ford Motor Company — means more people will buy bikes, specifically those made by his five-year-old company.

Cultural attitudes toward the car, especially in America’s big cities, are changing, a disruption largely introduced by technology: Uber (est. March 2009), Lyft (est. June 2012), and car sharing services like Zipcar and car2go have forced the hand of public transit officials who have equipped buses with GPS tracking technology, and fossil fuels-based automakers are aligning with ride-sharing start-ups or just buying them wholesale. Essentially, the future will have fewer cars.

But the bicycle, the transportation method that predates the car, has been experiencing something of an adjacent resurgence. While a group of friends can’t pile onto a bicycle for a late-night journey from a restaurant to a bar like they can with Uber, the bicycle rules for short trips, specifically those involving the “first and last mile.” City planners in Chicago, San Francisco, and Portland recognize this, where hundreds of miles of bike lanes and bike racks have been installed in recent years.

Even in Motor City, the bike is making a comeback, as a community-builder and an inclusive cultural phenomenon. Over the past decade, neighborhood bike clubs have played a huge role in getting people pedaling. Detroit’s Slow Roll has thousands of cyclists that cruise en masse and is one of the most popular group rides. City cycling is no longer about hardcore couriers determined to live alternative lifestyles.

Naturally, Pashak, 36, wants his company to be a part of the transition. He started his company in 2011, after falling in love with Detroit and relocating from his hometown of Calgary, Canada. Thanks to Detroit’s cheap and available warehouse space, Pashak saw an opportunity to open a production facility unrivaled by any other American bike brand. Detroit Bikes is the the only large-scale American bike brand that makes its own frames. He says the company has tried to provide jobs to experienced manufacturers laid off from auto-manufacturing jobs.

“Why don’t we just find a way to give people a bike that’s cool?”

Walking briskly through the 50,000 square-foot factory on a Monday morning, the scope of Detroit Bikes is immediate: Each room, with concrete floors of industrial grey, is home to a series of futuristic-looking machines that help to assemble and paint the bike parts that are made in-house. It feels like a cross between an auto plant and a bike co-op. It has the familiar smells and sounds of metal hitting concrete while an employee rides a commuter bike across the factory floor to his desk. Pashak leads the way down a small corridor lined with finished bikes and pulls out a minimalist, matte black model:

The C-Type isn’t cheap, but Pashak claims that at $600, it’s most affordable bike to be made and manufactured in America. With its only embellishment being a silver Detroit Bikes crest at the head of the frame, it’s no showstopper —— but that’s kind of the point. For Pashak, its all about getting more people cycling in their day to day lives, and the bike’s utilitarian aesthetic reflects that. He says bikes are often too boutique — with a boutique price tag — or they’re cheaply manufactured overseas. “Thats the perception issue with bikes,” he says, referring to the large divide between consumer options. “It’s only supposed to cost 200 bucks, or they think you’re supposed to marry your bike.”

“So I was like, well this is stupid on both sides. Why don’t we just find a way to give people a bike that’s cool, that works well, and then maybe more people will be part of that.”

Community engagement has always been a priority for Pashak. Before Detroit Bikes, he opened music venues in Calgary and Vancouver and founded Sled Island, a Canadian music festival that draws 30,000 attendees annually. In 2010 he ran for Calgary’s city council. He didn’t win the seat, but his foray into politics sparked a real interest in cycling infrastructure. “I just started getting into the idea of how cities are changing and how important it is that bikes are a part of that,” he says.

A city faced with sprawl, Calgary was the perfect example of a car-centric town with an increasing congestion problem in the city core. “Two hours of your life a day in a car to drive to and from work is a lot of your life,” says Pashak. “And people don’t factor that in. And there’s so much expense to the city as a whole, Calgary cant afford to clean the snow off its roads, because there are too many roads.”

Pashak is insistent that cities need to start adapting to accommodate more bikes. There are so many reasons, he says, to transition to less car-centric urban centers; from safety — in the first six months of 2014, there was a 10.4 percent spike in traffic-related fatalities in the United States — to the depletion of fossil fuels. “Every city in North America is considering expanding its bike infrastructure right now,” he says. “There’s not a mayor in North America that doesn’t think about bike lanes. Maybe they’re against them for whatever reason, but they’re thinking about them.”

Cities like Copenhagen, he says, are already proven examples of how cycle planning can flourish. In November, bicycle use surpassed cars in the the Danish capital, and 37 percent of Copenhageners use a bike for their daily commute. The city’s evolving road technology has a reputation world-wide, most famously for introducing Green Waves, a system that allows cyclists travelling at 20 km (12.4 miles) an hour to hit only green lights during rush hour. When cyclists do find themselves resting at a red light, Copenhagen has installed foot rests and railings to make things a little more comfortable.

Meanwhile, venture capitalists in China have started investing millions in bike-share startups as the alternative transit option proves to be more and more popular. Ofo, one of the fastest-growing bike-share brands, currently has 85,000 bikes in 21 Chinese cities. “The bike-sharing business is still in its early stages on the mainland, but may become the next big thing in tech and Internet investment,” Wang Chenxi, a senior analyst at Beijing-based consultancy Analysys Mason Group told the South China Morning Post in October.

Even Detroit Bikes is in on the action. The company recently completed a contract to build 3,000 bikes for the expansion of the Citi Bike bike share program in Brooklyn, New York. Pashak says the company is poised to take on a similar project in San Francisco throughout 2017.

“It’s a great early stage thing,” says Pashak. “If you don’t have your own bike on you, it’s nice that the city has that option for you. But what it really does is it starts chipping away at building that infrastructure.”

He says it’s as much in the interest of cities as commuters to limit the amount of cars on the road. “Anybody who’s thinking about cities from a planning perspective is aware of how challenging it is to accommodate so many cars,” he says.

The city of Detroit is launching major infrastructure initiatives. “Biking, walking and trails are now a key part of the mayor’s vision for the revitalization of Detroit,” Todd Scott, executive director of the Detroit Greenways Coalition, a nonprofit that’s working with local government to create a network of bike lanes and trails across the city, tells Inverse.

Whereas other cities have faced adversity to installing separated bike lanes because of a perceived lack of road space to accommodate them or demand for them, Detroit has an advantage: wide roads and not a lot of cars. “We were up to 1.8 million people in 1950 and we’re under 700,000 now,” says Scott. “And during that downsizing we built the interstate network within the city which pulled a lot of our cars off of the surface roads.”

Scott says Detroit currently has 0.3 miles of protected bike lanes, ranking it 78th among American cities. By the end of 2017, however, thanks to the work they’ve been doing in collaboration with the city, they plan to be in the top five. More bike lanes means more ways to accommodate Detroiters increasingly vibrant bike culture, but thats not all. “We’ve definitely seen a huge uptick, but we don’t want to play down the people that were already biking before,” says Scott. “We have a significant number of households that don’t have access to a vehicle.”

It’s the normalizing of bike culture that Pashak really wants to see more of in American cities. If bikes are seen as a utility that can be used by everyone, cities will begin to reflect that. “Bikes are awesome and they’re really belittled a lot of the time. They’re seen as something a kid uses, it’s a toy, or if you have a D.U.I. then you’re degraded into having to use a bike,” says Pashak. “But bikes solve a ton of problems. And it’s just a great technology that makes you feel better as you use it. It’s a really important technology.”