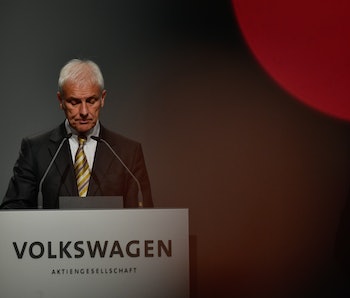 Volkswagen Group will finally see the true cost of cheating on emissions reporting in the United States today, and it’s shaping up to be the worst day in Volkswagen history.

The German car manufacturer is looking at around $15 billion in fines and settlements in the United States alone when the documents for the class action lawsuit are filed online at 12 p.m. Pacific time at the United States District Court, Northern District of California. Around 500,000 Americans bought Volkswagen diesel TDI cars that had special software to cheat on emissions tests. Since the fraud was detected last September, the company’s value has sank, leadership has been reorganized, and even movies about the sweeping scandal been discussed.

(The only time it would be worse to be a part of the Volkswagen group would arguably be the 1940s when the car manufacturer supported the German dicator with a little mustache and a micropenis.)

Volkswagen set up a website outlining the repercussions of the settlement and an FAQ, but it remains vague on exactly why this is so bad for the company. Here’s why:

Volkswagen will have to pony up a hefty sum to get back on America’s good side. Here’s how that settlement will be split, reported the New York Times:

$10 billion in vehicle buy-backs and fixes, $2 billion toward a green energy fund to help develop zero-emission technology, $2.7 billion to a clean air fund to help offset the pollution that the dirty diesel engines already caused.

Owners of the affected vehicles (in general, 2.0-liter TDI diesel vehicles from 2009 to present) will get at least $5,100 and at most $10,000. The buy-backs start in October and fixes will likely start in November, Reuters reports.

Oh yeah, there’s also the lawyer fees for all the Volkswagen owners and investment groups suing VW. And the fines for the additional 80,000 3.0 liter diesel-engine Porsches, Audis, and Volkswagens that will be decided at a later date.

The only larger environmental lawsuit by the United States was against BP for the Deepwater Horizon oil spill in the Gulf Coast in 2010. BP paid around $20 billion in settlements to federal and local governments, but as the Wall Street Journal reports, it wasn’t (and isn’t) all that bad. The payments were spread out, much of the fines are tax deductible as business expenses, and on-time payments of $1.1 billion every year for 18 years could actually help BP’s credit.

It’s not just the U.S. government Volkswagen has to face either.

Separate settlements for a vast number of states

In addition to what is going on at the federal level, Volkswagen has to contend with the 44 states, D.C., and Puerto Rico.

“The agreement in principle reached by certain parties to the Volkswagen litigation in federal court does not in any way resolve the consumer and environmental penalty claims of the states, or the states claims for injunctive relief,” New York Attorney General Eric Schneiderman wrote in a press release in April. New York is a leader in a coalition for further claims against VW, and Schneiderman writes that the multistate coalition will “vigorously investigate Volkswagen’s misconduct, and will aggressively pursue the recovery of substantial penalties and other appropriate relief.”

Volkswagen also has to deal with the Federal Trade Commission (FTC), which sued the company in March for advertising the diesel cars as environmentally friendly.

“Today’s announcement shows the high cost of violating our consumer protection and environmental laws,” FTC Chairwoman Edith Ramirez writes in a statement issued today. “Just as importantly, consumers who were cheated by Volkswagen’s deceptive advertising campaign will be able to get full and fair compensation, not only for the lost or diminished value of their car but also for the other harms that VW caused them.”

The United States could just be the start

Europe generally doesn’t have as strict of regulations on emissions as the United States. That doesn’t mean Europeans don’t want to scream out, “show me the money!”

Investor groups in Norway and Sweden both filed lawsuits in Germany, and Elzbieta Bienkowska, the European industry and internal market commissioner, went so far as to tell the Wall Street Journal that “Volkswagen should voluntarily offer compensation for European car owners that is comparable to what is being paid to U.S. consumers.”

That isn’t likely to happen, though. The stricter emissions standards in the United States mean that VW committed a harsher crime here than in European countries. Still, paying out for Volkswagen’s 11 million cars worldwide would be huge.

Today will likely be the worst day (or close to it because, you know, Hitler) that Volkswagen sees. One silver lining? At least it is moving forward in developing zero-emission cars now.

“And while this announcement is an important step forward, let me be clear, it is by no means the last,” Deputy Attorney General Sally Yates writes in a press release. “We will continue to follow the facts wherever they go.”