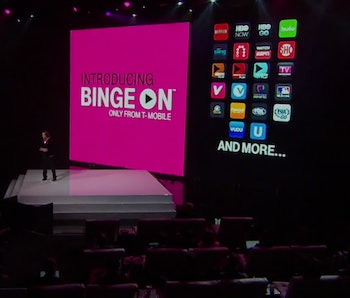 Back in November, T-Mobile and CEO John Legere made headlines during the company’s “Uncarrier X” event for a new feature: “Binge On.” Simply, it would be the ability for subscribers to stream videos on smartphones from select websites without dwindling away at their precious data plans. This was a big announcement, and people got excited about T-Mobile again. It was a marketing home run.

On Monday, however, all that pizzazz backfired horribly: The Electronic Frontier Foundation exposed that T-Mobile was, in fact, throttling all mobile video streams.

“Binge On” — which, we’ll just let the ethicality and wisdom implied by that title be — enabled T-Mobile customers with data caps of over 3 gigabytes to watch unlimited videos from a chosen group of sites (24 streams on its debut, including HBO, Hulu, Netflix, ESPN, and so on) with an “optimization” cap. This cap entailed a limit in quality: 480p “or better.” So, DVD quality, when possible, but never true HD. T-Mobile would let freeloaders freeload, in other words, so long as they were okay with subpar video quality. (They also rolled out a similar program, exempting music streams from data tallies.)

The feature was met with skepticism from some corners, in spite of its consumer-focused benefit (the consequence-free binging). Now this EFF discovery confirms circulating rumors that T-Mobile isn’t just “optimizing” — read, “throttling” — videos according to the Binge On parameters. Instead, T-Mobile is throttling every video that’s being streamed. They’re choking the quality out of the stream, asphyxiating the high definition, effectively degrading your smartphone to mediocrity. And they’re throttling regardless of whether the phone is capable of downloading the video or file at a faster rate. When T-Mobile users attempt to watch something in HD, they’ll likely see something like the following.

This practice is not only dishonest: as Slate reports, it violates the FCC’s Open Internet rule. Despite their best efforts to maintain a glossy cover and perfume-scented pages, it’s not the best time to be a T-Mobile customer.

If you’re a T-Mobile customer and would prefer them to cease the throttling, give them a ring and tell them you’d like to opt out.