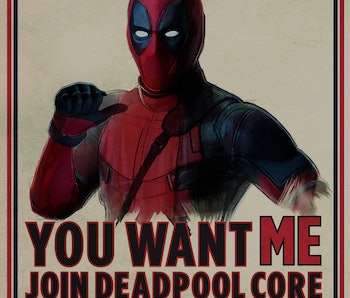 A decade ago, the idea of getting a mid-budget, R-rated movie about a second-tier superhero would have sounded ridiculous. Even now — in a post-Avengers world — Deadpool is a rare bird of a movie, a send-up of superhero adaptations that’s also an paean to comic book fanboy humor. It’s also a shot at redemption for Ryan Reynolds, who presumably lit his goofy Green Lantern suit on fire. Headlined by Reynolds and steered by first time director Tim Miller, the movie, out February 12, 2016, promises wit and lots of gunfire. It also promises to be a lot more fun for people who know what the hell is going on.

Here is what the hell is going on.

Deadpool is a Marvel Comics character [created by](http://marvel.com/universe/Deadpool_(Wade_Wilson) writer Fabian Nicieza and artist/writer Rob Liefeld in 1991. The antihero — real name: Wade Wilson — first appeared in the pages of a comic book in The New Mutants Vol. 1 #98 as a villain who was sent by a mysterious mercenary named Tolliver (who ends up being the supervillain Genesis) to kill Cable, the then leader of the New Mutants, who are a grittier version of the X-Men.

Nicieza and Liefeld created the character as [a spoof of the DC Comics character](http://www.empireonline.com/movies/features/deadpool-complete-history/] Deathstroke, hence Deadpool’s real name being similar to Deathstroke’s real name, Slade Wilson. But the character’s personality eventually morphed from a deadly villain to a wise-cracking semi-hero thanks to a 1997 series written by Joe Kelly, in which his comic adventures became a meta commentary on the arcs of similar Marvel characters. The character spoke to fans — in the most literal sense possible for a drawing.

But What’s His Origin Story?

Eventually the character proved to be so popular among readers he was made into a protagonist with an entire backstory. He was given the real identity of Wilson, a former military man and mercenary. Wilson was diagnosed with an aggressive and debilitating form of cancer before he was eventually granted healing powers rendering him nearly invincible by Weapon X, the same secret government program that used Wolverine’s similar powers to give him his iconic claws. Wilson is forced to wear a mask and assume the identity of Deadpool because the procedure of grafting healing powers into his DNA to combat the cancer caused his face to be marred by inoperable scars.

Not exactly. Wolverine is an avatar of unkillable angst whose Mr. Hyde-like aggression comes with parables on the side. Deadpool, on the other hand, seems to roll with the punches and take an insane delight in gleefully doing away with bad guys. And remember, Wolverine had the innate ability to regenerate and heal while Wilson was given the powers by Weapon X. Deadpool is amused by himself and his powers in a way that Wolverine definitely isn’t.

What Is a Merc With a Mouth?

This is where the meta-commentary comes in. Deadpool is filled with zingers, quips, and one-liners. He’s a deconstruction of other Marvel heroes in that he’s a smidge of good with a hint of schizophrenia to keep readers on their toes, and it’s sometimes implied that the Weapon X procedure accelerated a potential mental deficiency which causes him to constantly talk. He’ll crack a joke one minute and then learn that he may be responsible for the brutal deaths of his own parents the next. He’s also been known to break the fourth wall, unlike most characters, and directly address readers, while also learning new information in various storylines by reading back issues of his own comics.

Hold up, Didn’t I hear Something Particular About His Sexual Orientation?

You may have heard about Deadpool’s sexual exploits on Twitter. Comic book writer and comedian Gerry Duggan posted on his Twitter account that Deadpool was, in fact, omnisexual. A few years later, Nicieza also tweeted that “Deadpool is whatever sexual inclination his brain tells him he is in THAT moment. And then the moment passes,” on his own Twitter account. He eventually reiterated on Twitter that Deadpool’s sexuality was a non-issue, and indicative of the inclusive identity of the character himself. “I’ve been dogged with the DP sexuality questions for YEARS,” Nicieza said. “It is a bit tiring. He is NO sex and ALL sexes. He is yours and everyone else’s.”

Wait, I Thought I Already Saw This Dude in an X-Men Movie One Time?

You did, well, kind of. The character’s upcoming standalone movie won’t be the first time he was on the big-screen. It also won’t even be the first time Ryan Reynolds will play him. Deadpool previously appeared in the comic movie abomination known as X-Men Origins: Wolverine with the same kind of wise-cracks, katanas, and superhuman powers from the comics minus the iconic red and black suit.

But fans reacted violently at the more egregious artistic liberties taken by the filmmakers, which effectively defanged the Merc with a Mouth and turned him into the film’s de facto villain. Deadpool literally gets his mouth sewn shut in the end of the movie and is somehow able to absorb every mutant power he can, like Cyclops’ ocular lasers with some teleportation and telepathy thrown in for good measure.

Why Is He Getting His Own Movie?

Part do-over, part plan-all-along, Deadpool is coming to fruition because the studio heads at Fox knew they had bigger plans for him than just a measly cameo in X-Men Origins. A post credits sequence features (spoilers) the eyes of the character’s decapitated head popping open, leaving room for the upcoming standalone semi-reboot.

Deadpool himself is one of the most popular secondary characters in the Marvel universe and his own movie had been in development for awhile prior to Origins, but the current incarnation was jump-started in 2010 when Zombieland writers Rhett Reese and Paul Wernick were hired to bring the story back in step with the comics. The movie passed by a handful of filmmakers who were interested, including Robert Rodriguez, before directing duties landed on relative newcomer Tim Miller. The movie was fast-tracked when test footage Miller and his colaborators created became a viral hit after being leaked online. Miller, a visual effects artist, is no slouch when it comes to Marvel comic adaptations. He helped create the opening sequences for Thor: The Dark World, and also worked on the effects for Daredevil and Bryan Singer’s X-Men and X2.

Should We Trust Ryan Reynolds?

The Deadpool movie is technically supposed to be the eighth installment in Fox’s long-running X-Men franchise, and in an unofficial MCU mold it will ostensibly factor into a shared X-Men universe. Despite striking out in Origins and also appearing as Green Lantern in one of the worst comic book movies ever made, Reynolds seems fairly game this time around. According to Reynolds, past mistakes will be corrected. He told interviewers last year, “Deadpool appearing in Origins is not the Deadpool we are representing in this film, in any way shape or form,” and later, “We didn’t quite get Deadpool right, so this is kind of an opportunity to get the most authentic version possible on the screen.”

Is This the Last Time We’ll See Him in a Movie?

Don’t count on it. With the official Marvel Cinematic Universe thriving on leaving breadcrumbs for multiple movies in the future, it’s safe to say that Deadpool will be back even if this franchise starter is a clunker. Producer Simon Kinberg said Deadpool, Gambit, and the post X-Men: Apocalypse universes will feature character crossovers in the future, telling MTV News last year, “We have a clear sense of the directions we want to take them in and in my my mind at least, how we could start to cross-pollinate sort of with those characters that have their standalone movies.”

More like this
Gaming
4 hours ago
How to Duel Your Friends in the Marvel Snap Battle Mode
By Joseph Yaden
Culture
Jan. 18, 2023
Your science fiction education begins with Babylon 5
By Ryan Britt
Entertainment
13 hours ago
How The Last of Us Subverts a Harmful, Centuries-Old LGBTQ+ Trope
By Eric Francisco
LEARN SOMETHING NEW EVERY DAY.
Share: