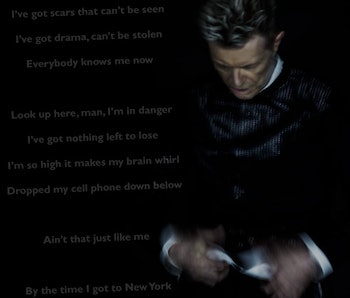 35 years ago this past weekend, David Bowie released Scary Monsters (and Super Creeps), a pivot away from — or electro-fied expansion — of the sound he had been developing during the previous five years on his Berlin trilogy of albums. From there, Bowie delved into new wave and dance music full tilt, delivering some of the biggest singles of his career with the Let’s Dance album in 1982. It was one of the most essential pivots in Bowie’s career. Since then, he’s rarely stagnated stylistically, except when he dropped out of music for a while — 21 years, that is. After a heart attack in 2004, and a break from touring in 2006, it seemed like maybe Bowie was hanging up the fedora for good on recording new material.

2013’s surprise release, The Next Day, was appealingly focused in terms of songwriting, sounding modern while signifying, in some sense, a return to angular, funk-rock form. Gone, unequivocally, was the industrial-music-informed sound in which he indulged in the early ‘90s. But we’ve heard little Bowie from the ‘80s that compares in quality to November’s “Blackstar,” the first single from Bowie’s upcoming full-length album of the same name, which goes live this Friday the 8th.

With the release of this 10-minute, avant-jazz-tinged track — and its fittingly surreal video — a revitalized, unexpected and thoroughly excited Bowie arrived. The restrained smooth rock of “Lazarus,” which followed in mid-December (and for which a video is expected out of Thursday), bore out similar ideas, inflected with a more guitar-heavy, bluesier sensibility.

The information we have: Bowie’s backing band throughout the album is the small ensemble of jazz musicians featured on these two tracks — a New York City-based group led by saxophonist Donny McCaslin. Bowie came across them in a jazz club in the West Village in Manhattan, and worked with them initially on the excellent, Charles Mingus-y 2014 one-off track, “Sue (Or In A Season of Crime),” which will be included again on Blackstar.

There’s been some debate about whether “Lazarus” itself would be featured on the album, since it was originally written for a stage production of the same name — featuring reworking of older Bowie songs. The production starred Michael C. Hall, who performed with the cast of the show on Colbert:

Though Bowie’s site claimed in October that his version of “Lazarus” would not be on the album, Colbert announced it as the new single from the album, and it showed up on the iTunes tracklist.

One of the most exciting and unusual tidbits we know about the album: Along with the usual (non-governor) Scott Walker, Kurt Weill and, well, early Bowie leanings, we can expect some new, unexpected influences to come into play on this album. Bowie’s long-favored producer, Tony Visconti, specified to Rolling Stone that Kendrick Lamar’s March album To Pimp a Butterfly was a big influence on the sessions for the album.

“We wound up with nothing like that, but we loved the fact Kendrick was so open-minded and he didn’t do a straight-up hip-hop record,” Visconti said. ”He threw everything on there, and that’s exactly what we wanted to do. The goal, in many, many ways, was to avoid rock & roll.”

Another revelation from the Visconti interview is that LCD Soundsystem’s James Murphy appears on two tracks playing percussion, though Murphy was once slated to appear in a co-producer capacity.

Like Scary Monsters, the single-minded Blackstar album could be a major turn for Bowie — who seems to be back and ready to produce more adventurous music at a faster rate. Let’s hope it’s a new beginning and not a final strong statement. But based on the information we have — most importantly, 3 out of 8 of its songs — it will be a must-hear, and definitely not just another mediocre, self-imitative release by an aging rock star.

Blackstar will be available for purchase and streaming on Friday, January 8th.

More like this
Entertainment
7.31.2022 12:30 PM
Star Wars leak changes everything we know about Yoda
By Dais Johnston
Gaming
8.9.2022 6:46 PM
League of Legends Star Guardian concept art is an emotional trip
By Robin Bea
Entertainment
8.10.2022 6:02 PM
Star Wars fans are mad about a "mistake" in Andor — here's why they're wrong
By Dais Johnston
Share: