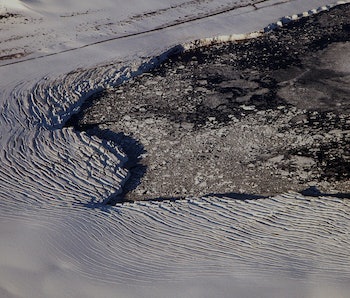 The North Pole hasn’t seen the sun in months — it stays dark from October till mid-March. But a few days after the Arctic’s darkest night, the winter solstice on December 22, the air above the ice is unseasonably warm. Temperatures have skipped over the freezing hump. Late Monday, as recorded by a buoy from the North Pole Environmental Observatory, the air was a melty 33 degrees Fahrenheit.

This isn’t typical for the North Pole, unless we’re talking about a typical June. And it’s predicted to get a whole lot less normal. Thanks to a warm storm blowing northward, the temperatures of the pitch-dark air are on the rise. As Slate meteorologist Eric Holthaus notes, temperatures could get up into the 40-degree range, an upswing some 50 degrees greater than average.

Though it’s tough to pin down extreme weather phenomena on global warming, climate change stacks the deck in their favor. The Arctic is heating at double the rate of the globe and had another balmy year. Earlier in December, the National Oceanic and Atmospheric Administration released its annual Arctic report card. The bottom line? Baby, it’s hot outside.

Update. University of Washington oceanographer Jamie Morison, a scientist on the international team that runs the North Pole’s automated observatory, sent Inverse data from the buoy closest to the North Pole.