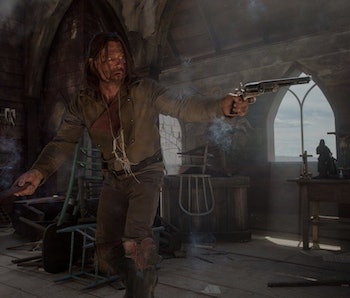 The results are in regarding Amazon’s 2015 pilot season: They are all being made!

It seems Amazon is taking the next step toward being a serious mover and shaker in terms of original programming, moving toward the Netflix model of oversaturation. This means that five of the six pilots premiered this fall have been put to series. This list includes Sacha Baron Cohen-helmed Highston, Louie-esque Tig Notaro/Diablo Cody collaboration One Mississippi, Zelda Fitzgerald mini-series Z: The Beginning of Everything, and a couple of kids shows.

The final one of the six will get at least a few more episodes. Of course, that is the one we rode hardest for here at Inverse: Lethal Weapon mastermind Shane Black’s Edge. Thank you, Santa Claus; we didn’t think it would ever get the chance to distinguish itself .

It’s a bit surprising, but despite the awful Southern accent and stereotypical biopic layout, it does boast the distinct charm of Christina Ricci, and the hook of a popular historical figure.

Last year’s accepted pilot, The Man in the High Castle had a successful first season — its blandness was outweighed by its cliffhangers — and was also renewed for a second season today.

In other Amazon news, Mad Dogs — a bro-filled expat intrigue and murder mystery featuring Steve Zahn, Billy Zane, Michael Imperioli, Ben Chaplin, and Romany Malco — premieres on January 22nd, and this month, our beloved Mozart in the Jungle impacts on the 30th. It’s an exciting time if you like way more streamable television than you can possibly watch.