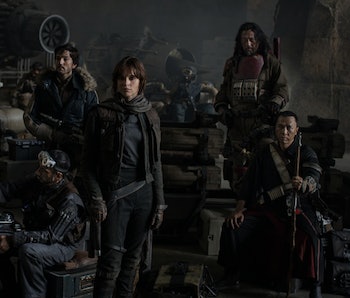 With all the hubbub focused on The Force Awakens hitting theaters this Friday, it’s easy to forget that we’ll get a new and different dose of Star Wars soon enough. The anthology movie Rogue One is the first movie set in the post-George Lucas universe Disney bought for $4,000,000,000. Reassuringly, the movie is in the hands of ridiculously talented people like Lucasfilm president Kathleen Kennedy, who has recruited equally talented people, including director Gareth Edwards, to branch Star Wars off into a Marvel-esque continuum.

Today — December 16, 2015 — marks one year until Rogue One hits theaters and details remain scant. But here’s what we’re expecting from a first look at the trailer.

You may think that the other Star Wars movies are based around a big ensemble. It certainly seems that way, but you’d be wrong. Most of them pepper in a massive galactic storyline with dozens of characters and a huge sci-fi world bursting at the seams. But their plots really only focus on three main characters at a time. Han, Luke, and Leia in the original trilogy, and probably Rey, Finn, and Poe in the sequel trilogy (let’s not mention the prequels here).

Based on its Ocean’s Eleven-esque plot about a group of pre-A New Hope Rebels stealing the plans to the original Death Star, we’d like to see Rogue One stress a collective of people coming together to get the job done. Granted, in every movie there has to be lead characters, but the Star Wars universe is filled with so many background characters, and it’s time for new ones to come to the fore.

With that ensemble comes the opportunity to make Star Wars about people other than white dudes. While characters like Princess Leia and Lando Calrissian were important stepping stones in ushering in diversity in big popcorn blockbuster cinema, the real heroes always deferred back to Vanilla Skywalker.

The Force Awakens busted the diversity problem wide open by casting Daisy Ridley and John Boyega as the leads, and Rogue One seems to be ready to pick up the baton and carry it all the way. Though their specific roles aren’t known at this point, the inclusion of actress Felicity Jones and actors Diego Luna, Riz Ahmed, Donnie Yen, and Jiang Wen will offer up some much needed new kinds of faces in the galaxy far, far away.

For however much Rogue One will try to do its own thing as the first Star Wars standalone movie it’ll still have to cater to the die-hard fanatics with some hefty fan service. This is, after all, a movie whose premise comes directly from the opening crawl of A New Hope, so there’s already a level of nerdiness inherent in the story. The Dark Lord of the Sith himself, Darth Vader, is rumored to appear at some point in the movie, and so is a CGI-enhanced version of original baddie Grand Moff Tarkin (actor Peter Cushing who played him died in 1994). Mix that with the idea that the movie will explore the crumbling political climate that saw Luke blow up the Death Star in A New Hope and you’ll have the perfect opportunity to get some glimpses in the trailer at what’s in store beyond the movie too. Rogue One is going to have to remind people why it’s here in the first place before setting off on its own.

A Not Particularly Star Wars-y Plot

It’s hard to know what’s on the other side of the coin that is narrative independence. We definitely want those sly, nerdy nods to the mythology we’ve come to know and love, but the trailer also needs to stress that Rogue One is a stand-alone story. Vader may pop up to force choke some dudes, and Tarkin may cut in to quip in his deviously British accent, but the whole of the story will have to be separate. While we’re certain the geniuses at Lucasfilm won’t let the tone stray too far from the throwback fun of the main stories, there’s opportunity here to go down potentially grittier or grown-up roads. Who knows, we might even get to see an R-rated Star Wars movie, but given Rogue One’s pioneering position away from the main storyline, that kind of change will probably have to wait.

Rogue One doesn’t have to worry about scale and will likely focus on just one specific group of people. What they accomplish will undoubtedly have bigger ramifications down the line — in fact it will explicitly have bigger ramifications given the Death Star going boom — but they can get away with some intimacy, something that the Marvel movies continue to struggle with.

They’ll use the big theme, but Rogue One will also need a variation. Look forward to getting it stuck in your head.