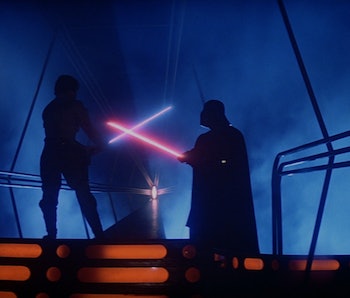 This Friday night, I’m going to sit in a movie theater with my best friend and his dad surrounded by hundreds of other fathers and sons to watch The Force Awakens. It’s a long-awaited movie whose franchise’s most iconic moment was when a man revealed to his son that he failed to be there. My own dad was supposed to join us. I battled Fandango’s shitty crashing all night to get a ticket for him, because he promised he would. He’s not coming. I’m not surprised.

My dad and I are good. Reliving our relationship isn’t a dark descent into an awful childhood because I was raised just fine unless you think suburban New Jersey is a nightmare. (I should also say that the hero who raised me was my mom, whose only negative trait is her disinterest in Star Wars.)

Whether because of its cultural dominance or cross-generational appeal or both, Star Wars is more than a movie. For my best friend and I, it’s our immigrant dads’ American dreams. It was the hottest thing happening when they arrived on U.S. soil during the Carter administration, and thirty years later their working professional sons are capable of paying $18 for IMAX 3D with their own disposable income. “Whatever you did to get here, thank you, now here’s some Star Wars.”

And I wanted to give that to dear old dad. Even though he didn’t take me to Yankee games or teach me how to change a flat or fight bullies or meet my girlfriends, I wanted to give him Star Wars because I can. Seeing empty chairs on birthdays and Christmas didn’t destroy me. Accepting my college diploma without him to hug me didn’t break me. When that John Williams score starts and his only responsibility is to sit his ass down and enjoy, I’ll know: I grew up fine without him every day.

But he’s not letting me have that moment. His absence is finally getting to me. Maybe I’m not fine after all.

Today, when I clock out in Brooklyn, my dad wakes up to teach English to middle schoolers in Manila. We never lived in the same house when I was growing up, so when he returned to the Philippines for good last year it was terrifyingly normal. After years spent working for the city of New York, he discovered he had nothing left to pursue in America. His youngest son was just about done with school. To anyone who emigrates seeking a new beginning, that’s mission accomplished.

But a few months back, he was stateside again to help my sister plan her wedding. In between flower arrangements and cake errands, I showed him the second trailer to Force Awakens which had just dropped, and with glee he promised to see it with me.

“Would you be willing to fly back?” I asked, knowing he would be in the Philippines by September.

“Yes, of course!” he said. Suddenly I was seven again, like when he took me one summer afternoon to see The Phantom Menace some sixteen years ago. I remember Skittles and soda and too much sugar and I wanted that all over again.

Except I’m 23, and I should have known better than to hold him to promises. But … fucking Star Wars. I was blind with excitement, as was everybody as more details about the film emerged, like maybe Luke is evil and Han is flying the Millennium Falcon again and Kylo Ren and Finn fighting and….

I’m not special when I say my dad introduced me to Star Wars, but he did. He loves George Lucas’ bizarre opera like anyone alive did in the ‘70s. (You should have seen his face at “Chewie, we’re home.”) I’m not unique, millions of generational bridges were built when Star Wars was released in April 1977. And those bridges will continue come Friday. Just not mine.

After my sister’s wedding, he returned to the Philippines — mission accomplished: see your daughter married — and we lost contact. It happens, another terrifyingly normal thing for us. And hell, even I admit I wouldn’t spend $1,567 on a flight from Manila to Newark with layovers in Tokyo and Dallas to see a movie, Star Wars or no. I get it. It shouldn’t hurt.

Every kid fantasizes about being Luke Skywalker and defeating the Empire. When I think about that moment in Empire Strikes Back when Darth Vader offers Luke to join the Dark Side, I scare myself when I think: That sounds like a great afternoon.

But like Luke, that’s just another memory I won’t ever have with dad.