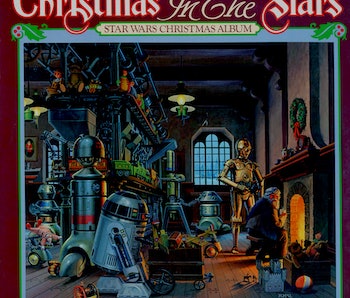 Everybody knows the lyrics, “Rudolph the Red-Nosed Reindeer / had a very shiny nose,” but do they know the equally immortal lines, “Everyone will have a cookie, / I bought extra for the Wookiee?” Probably not. Those words are part of the infamous Star Wars Christmas album, Christmas in the Stars. It’s a piece of early Star Wars ephemera that succumbed to relative obscurity since its November 1980 release (and it shouldn’t be confused with the equally infamous Star Wars Holiday Special). While Christmas in the Stars isn’t particularly good, it’s now readily available in an Amazon CD reissue. And it’s still one of the weirdest things ever to emerge from the galaxies of Star Wars tie-ins.

But first, some backstory: The album was the brainchild of producer Meco Monardo, the man behind the disco version of the Star Wars main theme from his album Star Wars and Other Galactic Funk. Monardo contacted Lucasfilm following the success of that record, but instead of another helping of Star Wars disco funk, he wanted to cover something completely different: Christmas.

No doubt thinking of the marketing genius behind a Christmas album sung by the toys that kids would want for Christmas, George Lucas approved the project with a few stipulations. In a 2005 interview with TheForce.net, Monardo explained that Lucas called him up, saying, “These are the things you can do, and these are the things you cannot do, but the one thing you must not do is kiss the Wookiee.”

With Lucas’s blessing and a promise of no Wookiee-kissing, Morado holed up in famous New York recording studio the Power Station. He’d get legendary Star Wars artist Ralph McQuarrie to paint the cover art, and Maury Yeston, a Yale University music professor who went on to win Tony awards for the musicals Nine and Titanic, to write most of the songs.

As for who would sing, he recruited C-3PO himself, Anthony Daniels, and Star Wars’ Academy Award-winning sound designer Ben Burtt to provide the sound effects of R2-D2 and Chewbacca for nine bizarre Star Wars holiday tracks of increasing absurdity. He also recruited a little-known 18-year-old singer named Jon Bongiovi (better known as Jon Bon Jovi), whose cousin Tony ran the studio, to sing about droids and the birth of Jesus.

What does the Star Wars universe and the birth of Jesus have to do with one another? Who knows, but here it is, track-by-track.

1. “Christmas in the Stars”

This first duet between C-3PO and R2-D2 is the first time you get the idea that the holiday enters into the album just to have the word Christmas constantly in the lyrics. Its such a generic Christmas track — replete with sleigh bells, violin flourishes, and chorus harmonies — that you don’t notice the “Christmas in the stars, Christmas in the stars, what a Merry Christmas this will be” refrain is mind-numbingly bland. Still, it’s catchy.

Pretty much just Daniels saying “bells, bells, bells” over and over again while making “roses are red, violets are blue”-level rhymes over another generic Christmas track. Bonus points for managing to cram indigestion, cows, Albert Einstein, and Christmas into a single song.

3. “The Odds Against Christmas”

Did you ever want a robot to teach you why Christmas is so special? Here’s your song. It’s probably the most sneakily integrated song of Star Wars mythos on the album because it plays on Threepio’s constant tendency to turn everything into mathematical odds.

4. “What Can You Get a Wookiee for Christmas (When He Already Owns a Comb?)”

Luke and Han are set, but what’s all this talk about getting a Wookiee love for Christmas? You get him a new bowcaster, obviously.

Here’s the first appearance of Bongiovi, aka Bon Jovi, who sings lead vocals. Now that we think about it, spending Christmas with Artoo would be pretty awesome. But why would we want to wish R2-D2 a merry Christmas in the first place? He’s a robot …

Probably the most tragic song on the entire cheesy album. C-3PO basically tries to teach R2-D2 the joys of being able to sing, while the little droid can only manage to produce beeps and boops. Thanks for rubbing it in, Threepio.

What does this song have to do with Star Wars? Besides a mention of a Wookiee and Chewbacca yelling, absolutely nothing. Though it does answer the question of what to get a Wookiee for Christmas from three songs ago.

8. “A Christmas Sighting (‘Twas the Night Before Christmas)”

This spoken-word story posits that Santa Claus — who purposefully doesn’t show his face around anyone — has an army of skeptical droids instead of elves building toys for kids all over the world. It’s a great rendition of ’Twas the Night Before Christmas, but does Threepio know he’s part of the problem that’s left dozens of perfectly hard-working elves out of a job? How rude.

9. “The Meaning of Christmas”

Well, it took nine ridiculous tracks before even talking about the meaning of the holiday. For some reason, this eight-minute song explains that Santa’s son helps Santa bring toys to people around the galaxy for an unspecified, non-religious reason. What it doesn’t say is that the real meaning of Christmas is to get some killer Star Wars toys under the tree every year.