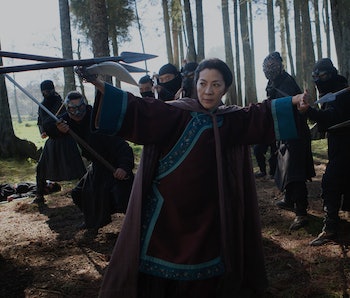 It will have been almost sixteen years since the first Crouching Tiger, Hidden Dragon when its sequel, Sword of Destiny debuts on Netflix and in IMAX Theaters on February 26, 2016.

From the Comic-Con Experience floor in Brazil, the trailer has arrived:

Sporting an unusual ‘80s techno soundtrack (Is that Kravinsky?), Sword of Destiny shows all the wire-fu and wuxia you can expect from the original Crouching Tiger brought to international attention back in 2000. The film stars Michelle Yeoh, Rogue One: A Star Wars Story star Donnie Yen, and Jason Scott Lee, all of whom duke it out the most in the trailer.

While The Raid and the Netflix-exclusive Daredevil show an affinity toward realistic, or anti-wire martial arts, it’s glorious to still to see grand, epic, and totally implausible kung-fu in movies.

Here’s the trailer for the original film, released on December 8, 2000:

More like this
Culture
6.30.2022 11:30 AM
You need to watch David Fincher's most important techno-thriller before it leaves Netflix this week
By Eric Francisco
Culture
6.28.2022 11:00 AM
5 years ago, the director of Parasite made his most unsettling sci-fi movie
By Allyson Johnson
Culture
6.26.2022 11:30 AM
You need to watch the most underrated cult thriller on Netflix before it leaves this week
By Dais Johnston
Related Tags
Share: