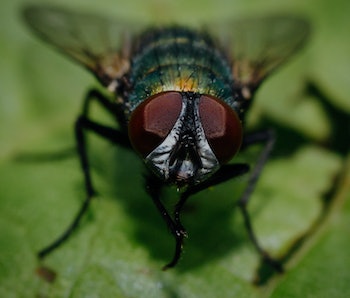 Flies don’t get a lot of respect from humankind. It’s a shame because they’re not too different from us — they really like the smell of bananas; they also creep around meals left on the kitchen counter. Flies and humans share between 99 to 60 percent of protein-coding genes, making the two creatures, to geneticists, first cousins.

That’s why a new technique developed to identify the active individual synapses active in a fly’s brain has so much bearing for people. Mapping the pattern of fly neural connections could provide insight to one of science’s remaining mysteries — how exactly our brain produces emotions and behavior.

This new research is led by Marco Gallio, an assistant professor of neurobiology at Northwestern University. The Drosophilia melanogaster — otherwise known as the fruit fly — is his favorite animal. Gallio and his team tagged fly brain neurons with fluorescent molecules marked with three different colors and exposed the fly to sensory experiences: heat, light, and the smell of bananas or jasmine.

The fluorescent molecules were split into halves: one for the talking neuron and the other for the listening neuron. When the fly responded to the sensory experiences, these neurons “talked” and came together at the site of active synaptic transmission — causing the tagged molecules to light up.

Much of what goes on in the brain happens where neurons communicate with each other — the synapse. Gallio’s research demonstrates that we can identify a specific pattern of instantaneous exchanges between neurons in the brain; synapses that are active during different displayed behaviors.

“Our technique gives us a window of opportunity to see which synapses were engaged in communication during a particular behavior or sensory experience,” said Gallio in a press release. “It is a unique retrospective label.”

A fly’s brain comprises about 100,000 neurons, making it a “miracle of miniaturization”, ideal for study. Even that tiny nubbin of a brain handles a huge flow of sensory information that we can map with precision. This study is the first instance in which scientists have been able to identify individual synapses — work that will help us understand the functional organization of the human brain.

“By day, a tiny bug content to live on our food scraps,” said Gallio in a ode to the bug. “By night, the superhero that contributes to saving millions of human lives as one of the key model systems of modern biomedical research.” The fly may not mind us, but we would do well to further consider the mind of the fly.