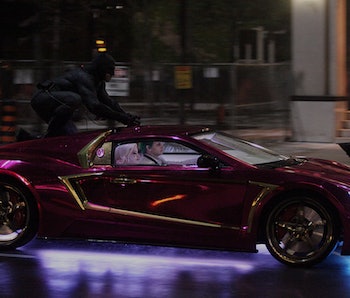 The Batmobile is nearly as famous as Batman himself, but when you think of the Joker, it’s his affections, all those cackles and manic grins, that spring to mind. The wheels are secondary. But that doesn’t mean the most dangerous jester on Earth doesn’t rock a cool ride. The Joker Mobile is an institution that hides in another institution’s shadow.

The exciting news on that front is that Suicide Squad, next summer’s big supervillain movie, will put the car front and center — along with love triangles to its portrayal of Cara Delevingne, and some sub-par tats. But will this car give the Joker Mobile the cultural resonance of, say, the Tumbler from The Dark Knight? To make an educated guess, we’ve got to take a breakneck trip down memory lane.

In keeping with the times, the Joker’s earliest cars has a futuristic vibe and the sort of rounded edges that proliferated before the mid-century design movement took hold. Essentially, the car was a civilian tank. It presumably could take a corner doing more than 30 mph. Needless to say, kids loved it.

Because Batman was initially a comic book character and nothing else/less, the initial Joker Mobile (“Jokermobile” at the time) was a ludicrous spectacle of questionable engineering designed to be as garish as the Batmobile wasn’t. The vertical tail fin was a particularly memorable and useless flourish. Needless to say, kids loved it.

The most memorable of the Joker Mobile’s incarnations up to this point has to be the car used on the Batman television series in the sixties. A modified jalopy, the car was incredibly garish and dumb — like the show. Everyone loved it, even though it had streetlamps on the side brown plush rug detailing.

Jack Nicholson’s iconic take on the psychotic clown didn’t do much driving — he’d rather dance with the devil in the pale moonlight. But when he did get behind the wheel, it was a 1978 Dodge 3700 GT sedan. Large, in charge, and decked out in his signature colors, this car was emblematic of late 80s trends, Joker style.

Mark Hamill’s cartoon Joker prefers conveyor belts to traditional wheels. It may seem odd, but the bonus is that they’re all-purpose, used for transportation and threatening people.

Heath Ledger’s anarchist Joker doesn’t concern himself with driving — he prefers to let his henchmen steal school buses and trucks he modifies logos on. When he does hop behind the wheel, part of the thrill for him is stealing and destroying vehicles without care. If he actually owned a car or consistently used the same vehicle — now that wouldn’t do much for his rep as an agent of chaos, would it?

Suicide Squad’s Joker car is a shiny pink number with ‘HAHA’ vanity plates. Its look echoes luxury sports cars like McLarens or Lamborghini but it is an Infiniti G35 with a custom Vaydor frame and it was built from scratch just for the film. The Joker’s trademark colors are purple and green, but this seems to be going in a more bubble-gum pink direction. The light on the bottom evokes the Fast and the Furious movies — which should be no surprise, as writer and director David Ayer was behind that too. It’s official, we’ve already got the plot twist: In addition to being a juggalo, Suicide Squad’s Joker moonlights as a street racer.