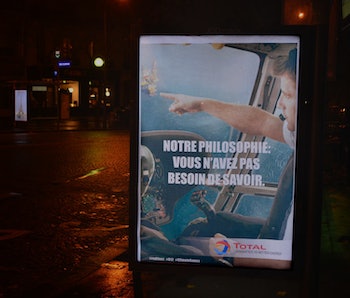 Brandalism, an anti-advertisement art movement, has claimed responsibility for the over 600 fake advertisements recently installed throughout Paris. The arrival of the satirical fakes coincides with the beginning of the UN Climate Change Conference. The posters, which have gone up all over the city, call out the corporate sponsors of the event for their own contribution to climate change.

“Amidst the French state of emergency banning all public gatherings following the terrorist attacks on 13 November in Paris, the ‘Brandalism’ project has worked with Parisians to insert unauthorized artworks across the city that aim to highlight the links between advertising, consumerism, fossil fuel dependency and climate change,” Brandalism explained in a statement.

The project is a collaboration between 80 artists from 19 different countries and the targets include AirFrance, Dow Chemicals, and Volkswagen, which is getting a lot of attention for perpetrating an environmental fraud.

All 600 pieces of art have been collected in Brandalism’s online gallery. No word yet on whether or not they’ll be sold.