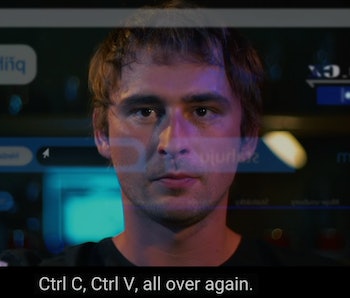 Going viral online can mean a lot of things for different people. For some, it’s a quick route to fame (ahem, Justin Bieber), an easy way to ruin your life, a fast path to getting attention for a cause you’re passionate about, or an excuse to disseminate one of the ‘80s best tunes. For one man, going viral was his Get Out of Jail Free card.

A man named Jakub F. was called out by huge software companies (like Microsoft, HBO, Sony Music, and 20th Century Fox) for pirating their products, according to the BBC. However, instead of slapping him with a hefty fine or jail time, these companies saw an opportunity.

The Business Software Alliance decided to make a public example out of Jakub and made a deal with him. If he cooperated in the production of an anti-piracy video that was able to get over 200,000 views within two months, then the companies would consider settling Jakub’s case out of court with less money and less hassle.

Thus, “The Story of My Piracy” came to be, starring Jakub as a software pirate who thinks he’s “too small a fish” for the big companies to care about. The video looks less like a hokey PSA and more like high-production value film clip, with scenes of Jakub copy-pasting his way into trouble with the law.

“Ctrl C, Ctrl V, all over again. I was in a community of people who carry out warez,” Jakub says in the video. “We used to spread illegal computer programs, but I kinda felt that all I’d been doing wasn’t illegal. We used to take those from rich companies and distributed to the users.”

After eight years of uploading numerous gigabytes of information to various filesharing sites for people to download, Jakub’s personal Robin Hood-esque mission caught up to him in a bad way. Now, Jakub’s video has garnered over 740,000 views on YouTube — almost four times the number of views he was required to earn as part of his settlement.

Jakub appears to have been a willing participant in this video, and the project’s objective (plenty of views) has been fulfilled. Does this mean that “going viral by example” could be the latest form of restitution in the digital age?

Will we see more instances of people subjecting themselves to public consumption (or worse, humiliation or shame) in order to bypass harsher punishments? Who knows, but it sounds kind of like a horrifying episode of Black Mirror to us.