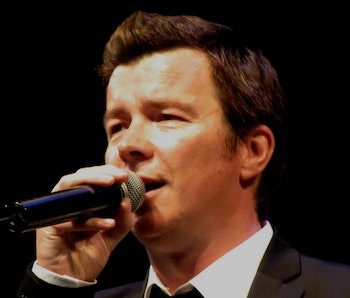 Before you start reading, you really need to check out this awesome feature we’ve just built into the site. We’ve been working extremely hard on it, so just click here to see it.

Yeah, you knew that was coming.

The deviously simple, hilariously satisfying, and instantly played-out Internet meme that involves tricking people into watching the music video for singer Rick Astley’s buttery smooth 1987 hit “Never Gonna Give You Up” has been fooling the masses since 2008. Its story begins with a photo of a duck.

Sometime in 2005, Christopher Poole, the founder of infamous Internet black hole 4chan who goes by the username “m00t,” decided to prank his users by writing in a command for the site’s message boards that would change “egg” to “duck” every time someone used the word in one of the site’s many posts. The surreptitious glitch was quickly uncovered by the eagle-eyed 4chan community, but it didn’t stop there.

Eventually, users took the word “duckroll” — intentionally changed from the word “eggroll” — to extend the prank. Fake links were planted throughout the site to redirect users to allegedly interesting stories, but instead of bringing them to breaking news or an important site the link simply led to a crudely photoshopped photo of a duck on wheels. It makes absolutely no sense, but it isn’t supposed to, and that’s why it’s funny.

At that point, the nascent viral bait-and-switch idea was already in place. 4chan users deployed it for harmless jokes among themselves, but Astley and his tipsy-father-of-the-bride dance moves didn’t get lumped into the mix until March 2007, when a video game changed everything.

That month, the Internet was abuzz with anticipation for the first trailer for Grand Theft Auto IV, the installment in the controversial/badass game series due for release the following month. When the trailer was finally unleashed on gamers, they swamped the Rockstar Games website, the game’s developer, leading 4chan users to jump on the dead link to the trailer. In one of those glorious moments that live outside of explanation and logical thought, a user “duckrolled” anybody clicking the link. But instead of the photoshopped duck image, anybody who clicked was greeted by a music video from the late ‘80s featuring the dulcet tones of a scrawny 21-year-old white ginger Brit singing about never giving you up, letting you down, running around, or deserting you. Presumably the thinking was: Rick Astley is the anti-Grand Theft Auto IV. That reasoning holds up today.

Rickrolling was now a thing. The world would never be the same.

It spread faster than most memes via the normal routes: more message boards, social media, word of mouth. People co-opted the switcheroo to illustrate the absurdity behind the predetermined opinions of those willing to click on random Internet links and perpetuate self-fulfilling expectations. They’d post links promising exclusive videos of Michelle Obama’s racist remarks or imploring people to check out some celebrity train wreck’s latest unbelievable freakout. People clicked, and the joke was on them. There was Astley to greet them. Never gonna let you down.

The joke’s rapid popularity seemed to be a perfect mix of stereotypical Internet buffoonery, vague pop culture awareness, and people genuinely fascinated by Astley’s image versus what they were hearing. How could that voice come from that dude? Astley himself seemed fairly entertained by it. He told the Los Angeles Times, “I think it’s just one of those odd things where something gets picked up and people run with it, but that’s what’s brilliant about the Internet.” Never gonna tell a lie, that guy.

Instead of aggressively lampooning something by pointing out why it sucks so much, rickrolling is one of those rare memes that seems appreciative of its subject, even in jest. But like all memes that started off as an inside joke between entitled Internet trolls, rickrolling easily broke into the wider mainstream consciousness as quickly as it began, with an estimated 18 million people being tricked into clicking to the video in 2008 alone.

On April Fool’s Day in 2008, anybody who clicked featured videos on YouTube’s main page was brought to Astley’s music video. Astley’s song won by millions of votes when the New York Mets polled fans on what they wanted as an eighth inning singalong, causing the team to scrap the contest … only to play the song anyway and effectively rickroll their own fans. Astley himself even made a surprise appearance on a float at the Macy’s Thanksgiving Day Parade that year to rickroll viewers.

But the meme reached critical mass when the government got involved. The White House replied to a Twitter user complaining about fiscal policy, pointing the user to a helpful link — that turned out to be less than helpful.

Rickrolling has remained oddly popular. The owner of the most prominent rickroll video perhaps put it best in its comment section saying, “As long as trolls are still trolling, the rick will never stop rolling.” Despite Astley getting only $12 in performer’s shares for more than 39 million plays of the video on YouTube, he credits the phenomenon with reviving his career. We’re never gonna give him up.

More like this
Gaming
8.17.2022 12:00 PM
Super-streamer Ludwig Ahgren hates the same awful gaming trends that you do
By Steven Asarch
Gaming
8.17.2022 4:00 PM
We Are OFK can't deliver on its promise of musical spectacle
By Willa Rowe
Gaming
8.9.2022 6:46 PM
League of Legends Star Guardian concept art is an emotional trip
By Robin Bea
Share: