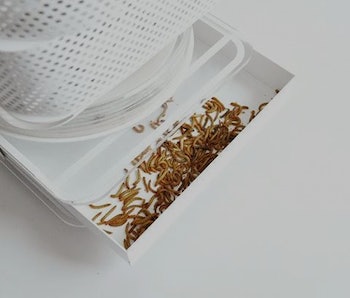 The Edible Insect Desktop Hive will let you raise your own mealworms for meals within the comfort of your kitchen. A Kickstarter project belonging to an Austrian woman named Katharina Unger, the device looks like a stack of Tupperware shelves, standing only a couple of feet high—small enough to sit on a counter. However, if used as intended, the Hive will allow its owner to farm mealworms for food, a concept Unger explains wasn’t always easy for her.

“When I first bit into a mealworm two years back, I’ll admit, it was a bit weird,” she says in her Kickstarter intro video, “but shortly after, I was really pleased about the crispy texture, and the neutral taste, so you know, eating insects, for me, was also overcoming a hurdle in the beginning.”

Statistically, it shouldn’t be hard to debate the merits of mealworm eating. According to mealwormcare.org, the bugs are “nutritious insects that are high in protein and fat,” with dried mealworms made up of over 50 percent protein.” The insects “can also be pan-fried, but dry-roasting is often the tastiest and least recognizable way to eat them.”

Unger tells a tale of growing up on an Austrian farm, where the food she ate was raised on-site. She moved to a city (which city she never specifies), a place where “I found it hard to find out how and where my food is produced.” Driven to create a way to raise sustainable, healthy edibles in her urban environment inspired the invention she’s now seeking to fund.

Unger goes on to explain that she, and her company LIVIN Farms, spent two years researching and prototyping the Desktop Hive, looking to devise a better way to control and cultivate dietary protein. “Industrial livestock production costs us one-third of the fertile cropland worldwide, and 80 percent of all antibiotics,” Katharina claims, “This system pollutes…and makes us sick…with our hive, you can grow healthy mealworms in a small space in your home…while only taking a quarter of the feed and 10 percent of land that is required to grow the same amount of beef.”

Using a mix of vegetable scraps and oats, the Hive is climate controlled and self-contained, and is supposed to be able to provide 200-500 grams of mealworms every week, which Unger touts is equal to “the amount of meat served in five or six mixed dishes.”

For more information, as well as a look at some prepared meals, visit livinfarms.com.