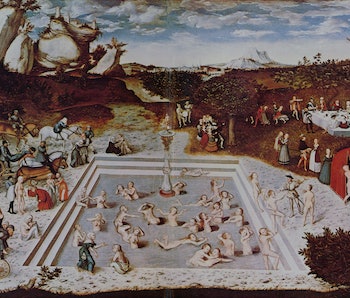 Over the course of the last century, Americans have seen their life expectancy rise by 25 years. And that number is continuing along the same trajectory as medical technologies advance. According to Adrian Cull, founder of the Live Forever Club, it’s only a matter of time before we outstrip death altogether. He plans on being around when that happens.

Cull’s stated goal is immortality, something he treats like a looming holiday. His strategy, which he outlines in his Live Forever Manual, is to use today’s science to buy time until tomorrow’s science arrives. He talked to Inverse about beating death, the Transhumanist Party, and convincing a skeptical public that he’s not insane.

Aging happens to everyone. Are you saying there’s a way to prevent that?

People are naturally going to die at around age 90 to 120, if they have no disease, no heart attacks, no lung disease, no mental health problems. You’re not going to get past 120. But the difference between dying at 60 from one of those diseases and pushing that back to 90 — it’s that 20, 30 years of medical progress. The idea of the book is that increasing your life expectancy every year so you can live a bit longer massively increases your chance of living forever.

What medical technologies are you hoping will be developed?

To cure aging, it will come down to the cellular level. Before then, you’ve got a good chance at curing heart disease and cancer. You’ve got artificial limbs, whether that’s growing them, 3D-printing them, mechanical versions of parts — there are lots of options to replace organs. There’s good medicine, matching current drugs to your particular disease. You want to have a model where, if I get cancer — eventually I probably will — rather than buying 10 different drugs, I’ll buy one that’s good for me. Let’s get my personal DNA and match it against everything you know about what’s on the market. In the 2030s, 2040s — that’s when they’re going to get down to the cellular level and figure out how to break down these cancerous cells.

The idea of immortality is a difficult thing to sell. How do you convince people that it’s not crazy?

I’m not sure. The U.S. presidential candidate Zoltan Istvan is head of the Transhumanist Party and crowdfunded an “Immortality Bus” on IndieGoGo. His tour bus for attending all the presidential campaigns is in the shape of a coffin. He is really trying to raise the profile of immortality. I’m not brave enough to do that, but I have a lot of respect for him. The only way to start getting people to think about it is in small groups — just raising awareness that this sort of thing is around the corner. We want people to start thinking about it. We want people thinking what politicians are going to be doing in 10, 20 years time when this is really going to have an impact on society.

In your book you plan to offer practical tips. What does this mean for our day-to-day lives?

Rule number one: Stop smoking. If you smoke, you give up half your chances of getting there. And there’s normal things, like diet and exercise. There are things you can do at home, like reducing blood pressure and heart rate, that have a huge impact on your general health. But that’s all science and research-based.

I’m certainly hoping there will be more radical approaches as well. There’s also going to be things like storing your stem cells. I’d like to investigate who’s offering that service. I want to be storing stem cells today — before the outside starts aging — so when we develop the technology to grow my own parts, I don’t have to get a replacement organ and I can actually repair my own heart or repair my own lungs using my own stem cells. I’ll be doing it with my 40-year-old stem cells rather than my 60-year-old stem cells.

There are definitely going to be clinics out there offering longevity solutions without any science basis at all. I want to weed those out and avoid those ones as well.

Are people equipped to make that decision?

Plenty of people have that ethical debate about whether or not you should. I think it’s interesting. People say, ‘look at all these consequences.’ I say, ‘I agree with you, there will be significant consequences.’ I have no idea how society will cope, but that will not stop somebody wanting to live forever. If someone comes out tomorrow with that pill, the government can’t say stop taking that pill. People will take it. These are things you’re going to have to warn people about, and getting people to start thinking about it is great.

Is aging a disease?

Yes, definitely. There’s heart disease, cancer, and, surprisingly, dementia. Once those are cured, you’ve still got general aging. Basically, your cells don’t replicate as well as they used to, so you’ve got more dead cells in your body. I can’t think of any other way. I guess this is a philosophical question: Do you see it as a disease or a natural part of life? I’m definitely in the aging is a disease camp.

Do people want to live forever?

I think the answer’s no. The people who do, really do. You don’t half-want to live forever. If you want to, you definitely want to. There’s this online survey, where they ask that question every year, and around 35% of people say yes. I thought that was amazingly low.

Imagine a 90-year-old — a bit in pain, not doing anything exciting. If we cure aging, then it’ll be a few years after that when we can reverse aging. If you could have a 20-, 30-year-old body again, which is going to be far more useful for you and certainly pain free, then you’d want to live forever. Still, an awful lot of people don’t think it’s not natural, that death is a natural thing and we shouldn’t fight it. While I try to find practical situations in the book, I also try to find all the sourcing. It’s interesting, but a lot of the books that talk about living forever are religion based. I’m trying to avoid all of that. My book is a decision. If you want to live forever, then you have a person to talk to.

More like this
Mind and Body
19 hours ago
First-of-its-kind study reveals transgender children are extremely unlikely to retransition
By Nick Keppler
Mind and Body
5.14.2022 11:00 AM
How to treat adult ADHD: A psychologist explains medication and more
By Laura E. Knouse and The Conversation
Mind and Body
5.10.2022 10:31 AM
Studies linking nature to better mental health focus on wealthy nations — here's why that's a huge problem
By Nick Keppler
Related Tags
Share: