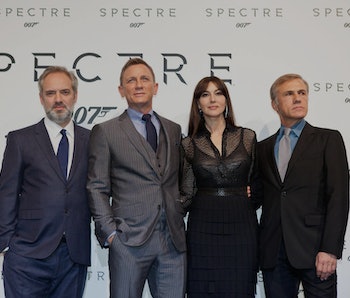 The box office bounced back last week and that should be the story again this weekend, with slightly lesser results. Bond’s shadow looms large, and even a smaller fan favorite like Charlie Brown won’t be able to topple him. There’s new movies about trapped miners, bickering families, and a ripoff of Rudy by the guy who made Rudy. You probably don’t have to know anything about them other than that, but here’s what you should expect from the box office this weekend.

What Will Win: Spectre

Bond is going for two winning weekends in a row. It opened well below the $88.3 million first weekend haul by the previous Bond installment, Skyfall, but it still managed to kick-start the movie playing field in November following an eight-year low for the month of October. Spectre isn’t garnering the same ecstatic reviews or word of mouth as Skyfall — it isn’t even getting the same positive buzz that pushed The Martian into owning October — but with a franchise like the half-a-century-long Bond series, the quality is secondary. These things are going to make a whole lot of money no matter what, it’s just a matter of how much. Spectre’s numbers should drop more than 50 percent on its second weekend, but with no real competition until Mockingjay - Part 2 hits on November 20 it should be smooth sailing for Britain’s most bloodsoaked public employee.

What Will Disappoint: The 33

Captain Phillips was good and all but, like, not every real-life story that captures the news cycle for a period of time needs to be a melodramatic big-screen adaptation. Based on the story of the group of Chilean miners who were trapped underground for nearly 70 days in 2010, The 33 hits American screens with basically zero buzz and a host of negative reviews. It didn’t look good for those Chilean miners back then and it doesn’t look good for star Antonio Banderas or his comrades. If we’ve learned anything from the Steve Jobs debacle it’s that true-life stories aren’t sticking with audiences who seem more keen on escapism. Look for The 33 to manage less than $10 million in its opening weekend, which should let it teeter on or above the top five.

What Will Surprise People: The Peanuts Movie

If Spectre wasn’t out right now we’d be having a very different conversation. The Peanuts Movie wasn’t the breakout animated movie of the year — that title would belong to Minions — but Charlie Brown and friends still put up good first weekend numbers with $44.2 million. It’s perfect counter-programming to Bond, families drive ticket sales, and nostalgia is a thing. Pixar’s second movie of 2015, The Good Dinosaur, arriving before Thanksgiving weekend on November 25, will outdo it. Still, give The Peanuts Movie credit for doing a handy job of bucking the overwhelming trend of terrible CGI-tinged big-screen cartoon throwbacks.

What’s On the Horizon: Creed

The last Hunger Games movie, like Spectre, will make bank regardless of its quality. But instead of Katniss, keep good ol’ Rocky in your thoughts. The unorthodox spinoff Creed hits just before Thanksgiving, and will extend Sylvester Stallone’s nearly four-decade-old series by bring the story of the son of the Italian Stallion’s greatest opponent and best friend to the fore.