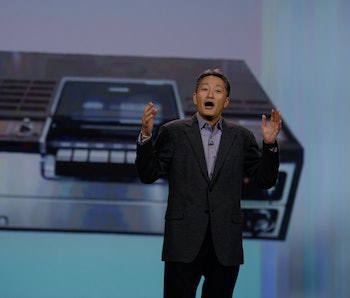 Chiseling the end-date of Betamax on the tombstone of your heart, Sony has announced it will finally stop selling the video cassettes in March 2016.

Those born in the ‘70s and ‘80s who remember Betamax might be surprised that the format survived this long. Sony hadn’t made a camera compatible with the tapes since 2005 and ceased production of the video players in 2002.

Today, Betamax is mostly known as shorthand for the loser in a face-off between competitors. Sony premiered the format in 1975, and though it was widely considered to be superior in quality to VHS, as the vicious format war took its toll the cassettes failed to capture a significant share of the market.

Not even giving grandma her best birthday ever was enough.

Part of Betamax’s failure was that, quality aside, Sony insisted on pricing the system at hundreds of dollars higher than VHS players.

Wall Street guys are a niche market that can only take you so far:

As any Apple-head can testify, just because a product is ridiculously priced compared to its competitors isn’t enough to kill sales. While Sony’s chairman and founder Akio Morita decreed that Betamax could only sell under the Sony brand name, VHS-developers Matsushita (which became Panasonic) had no such vanity. Sony’s rivals agreed to license the system to any manufacturer or retailer who wanted its own name on the box. VHS manufacturers also wisely cultivated partnerships in the burgeoning home video market.

Still, Betamax has remained popular in its native Japan and the cassettes will continue to retail through Sony’s Japanese website, the virtual rest home where it will spend its twilight years. Barring a format renaissance like the one hipsters have gifted to cassette tapes, it seems likely this will be Betamax’s final resting place. Sleep well, Betamax, in electric dreams.

More like this
Innovation
8.12.2022 9:30 AM
Indoor lights make us sick — this technology could fix that
By Miriam Fauzia
Innovation
8.14.2022 10:00 PM
60 years ago, an iconoclast designer revealed a fix for our biggest tech problem
By Tim Gorichanaz and The Conversation
Innovation
8.16.2022 11:00 AM
Scientists finally found an efficient way to recycle plastic foam — it could make them rich
By Joanna Thompson
Related Tags
Share: