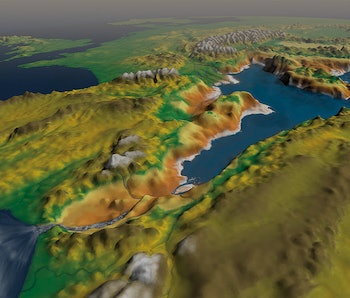 A bit more than five million years ago, the Mediterranean Sea was drying up. The process, now referred to as the Messinian Salinity Crisis, turned the ancient sea as a 1.5-kilometer-deep, salt-caked basin for about 270,000 years. But exactly how this happened, and how the Mediterranean filled again, has long been a hotly contested known unknown in the scientific community. An international research team led by geologist Dr. Christian Ohneise changed that today, announcing a theory that (ironically) holds water and may have implications for how we model potential climate change scenarios.

“In our research we have shown that sea-level changes around the world are uneven and that the Earth’s crust changes shape slightly depending on whether there is ice in the Antarctica,” Ohneiser, who is currently at the Scott Base research facility in Antarctica preparing equipment for a research expedition to study the Ross Ice Shelf, told Inverse via email. Ohneiser and his team determined that Antarctica’s ice shelves were growing in the lead up to the Messinian Salinity Crisis by examining 60 sedimentary drill cores from around the edge of the southern continent. The timing of the ice growth didn’t match up with previously proposed theories about a global fall in sea levels so Ohneiser and his team plugged their new data into a computer model that simulated growth in the Antarctic ice sheet.

“In our research we have used simulations that include the ‘uneven’ sea-level formulas, which solved one of the puzzles surrounding a geological mystery — the Messinian Salinity Crisis,” says Ohneiser to Inverse.

Ohneiser believes that the Antarctic ice sheet’s growth had an uneven effect on the global sea level because of a complex interplay between gravitational and rotational effects along with the deformations of the Earth’s crust due to the ice’s advance and retreat. When the Mediterranean evaporated, the Earth’s crust surrounding the Strait of Gibraltar, rose up, and isolated the sea from the ocean. Over time Antarctica began to melt and the crust began to sink until, boom, 5.33 million years ago seas were able to rush over the land bridge at Gibraltar.

What does this mean for us? Presumably that the melting ice caps will not bring sea-level up evenly — and that sea-level may be a flawed idea in its entirety.

“In the future, if the ice sheets do retreat, the impacts will not be even around the world,” Ohneiser said. “These changes in the shape of the crust are something which needs to be accounted for in sea-level rise simulations.”