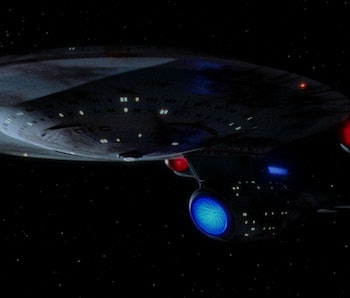 Earlier this week, CBS announced a new Star Trek television series, slated for 2017. The press release was low on details, other than attaching a producer from the films and being aired on CBS’ streaming site. So we decided to wildly project our hopes and dreams onto what we wanted from Star Trek.

Rowan Kaiser: Once upon a time, science fiction was the heart of experimental television structures. The core of the contemporary “Golden Age” of television was serialization, and it was tested and practiced in the laboratories of 1990s science fiction. Shows like Star Trek: Deep Space 9, The X-Files, Babylon 5, Farscape, and eventually Battlestar Galactica succeeded, failed, or both, and helped future series become better. But nowadays that energy’s all with other genres, nary a spaceship to be found.

This is why I’d love to see someone like Justified’s Graham Yost at the helm. With that show, Yost demonstrated a mastery of structure, switching back and forth between standalone episodes and overarching plots with ease, and building and releasing tension at all points of a season, not just a climactic ending. He’s also superb at dialogue and office dynamics, both of which are essential for a starship-bound show. Finally, Justified is the show that gave my pick for captain — Margo Martindale — an Emmy, so let’s take advantage of that connection.

I’m less concerned with where the new Star Trek series fits in the universe and lore than I am with its tone. The gritty action seriousness of the recent films (and the Next Generation films before that) barely works for those, and definitely shouldn’t be applied to a television show. Yet the earnest seriousness that much of the previous series are built around has always been a bit of an issue. I’d like to see a more fun tone, of clever characters geeking out about the joys of space exploration, while wryly handling the dangers. That would be a Star Trek I’d be delighted to watch from the start.

Brock Wilbur: After the years of championing it, I’d love to see Bryan Fuller get his shot at this. Ever since he was an out-of-place writer on Star Trek: Voyager he’s been trying to get the series back, and he’s got such a knack for otherworldly adventure in a serialized fashion that I’d just adore seeing his take. When I think of people that have also shown a sense of knowing how to do space adventure lately, I think The Nix Brothers did a killer job on Yahoo’s Other Space series. And now that I’m thinking about Yahoo, hell, what would be so awful about a Dan Harmon-led Star Trek, especially if the captain’s log is full of drunken rants.

The reboot film series had repeatedly been criticized for never taking on the Enterprise’s mission to seek out new life and new civilizations, but it was never going to do that in the format of big tentpole films, so it’s exciting to get back to the potential of doing real weird stuff in real weird spaces. We haven’t had a great exploration show in any genre in a while; the only shows doing bizarre characters right now are mostly DC/Marvel comic book properties. I guess all I really want at this point is a TV show with a robot main character. I miss robots. I love robots. More robots. An entirely robot Star Trek.

I’d be totally on board to set this new series on the NCC-1701-C, the precursor to Next Generation. In the continuity of the show, this ship had a lady captain (allowing for Rowan’s Martindale dream casting) and only appeared in a NG storyline where the ship falls into some kind of silly space thing and creates its own alternate timeline. It’s perfect!

Eric Francisco I want to see Babylon 5 crossed with a healthy dose of Arrow. Hear me out.

I’m a newbie to Star Trek, having only begun watching the original series this year after meeting Nichelle Nichols and George Takei (Whoops, let me pick up these names I’ve dropped). But I have seen Abrams’ movies, Wrath of Khan, and some TNG reruns that aired on G4tv. So I’m not totally Trek-illiterate.

Babylon 5 is to this day the best sci-fi TV I’ve ever witnessed, bar none. I was playing Mass Effect at the time I was bingeing on DVDs. Babylon 5 made me feel like I was watching Mass Effect. I loved the gigantic scope, and the breathing world J. Michael Straczynski made me believe existed. To a kid watching Game of Thrones today, that’s how I felt about Babylon 5. Watching original Trek now, I understand how audiences felt about its wide open imagination at the time. But I think it was truly achieved in Babylon 5.

In regards to Arrow, it may be the best at doing action right now (until Into the Badlands comes on). I know Star Trek has never been an action-heavy franchise, but watching the original series I feel like they would totally have if they had the budget and capability to. A great Star Trek series for me would be heavy on the mind with just enough to dazzle the eyes.

Beau Willimon for showrunner. He’s the closest at doing Straczynski-style politics and because you don’t actually want Straczynski himself now. Gina Torres for captain. Koichi Sakamoto for the stunts. Why can’t Sulu actually know some kung-fu?