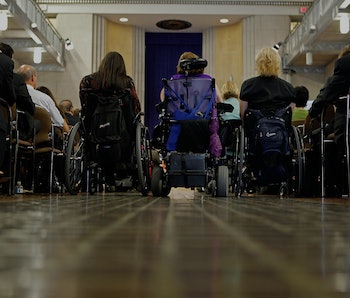 While 2015 is the 25th anniversary of the Americans with Disabilities Act, people with disabilities still face hurdles when it comes to finding employment.

A new study produced by researchers at Rutgers and Syracuse University discovered that employers are less likely to respond to candidates with disabilities. In a field experiment where potential employers received applications created for the study, the fake applicants with disabilities received 26 percent fewer expressions of interest.

This study is the first field experiment to focus on disability and hiring in the United States while incorporating real world evidence. Applications were sent to 6,016 advertised accounting positions, with one-third of the cover letters revealing that the applicant had Asperger’s Syndrome and another one-third had a spinal cord injury. The remaining letters did not mention a disability.

All resumes were designed to show the candidates were highly qualified, while they were split between coming from novice and experienced candidates. Applicants that disclosed their disabilities received particularly low interest from employers when the firm was small (less than 15 employees) and when the applicant came off as more experienced. There was no statistical difference between the rates of replies from applicants who stated they had Asperger’s Syndrome or had a spinal cord injury.

The study’s authors note that it’s important to acknowledge that the disability hiring gap was particularly concentrated among small private firms, who are not covered by the Americans with Disabilities Act. Previous studies have argued that because the ADA requires employers to absorb the cost of accommodating disabled employees, that the mandate led to a decline in employment of people with disabilities.

“While we cannot be certain that the ADA is responsible for helping close the gap among covered employers, this evidence indicates at a minimum that the ADA does not appear to be discouraging employer hiring of people with disabilities,” the study’s authors write.

In a report to the White House, National Council on Disability Chairperson Jeff Rosen states that the Council hopes that by 2040 all people with disabilities will have the opportunity to choose the career they want.

“Youth and young adults who were born in a post-ADA era have still not experienced all the protections that the ADA introduced 25 years ago,” writes Rosen.