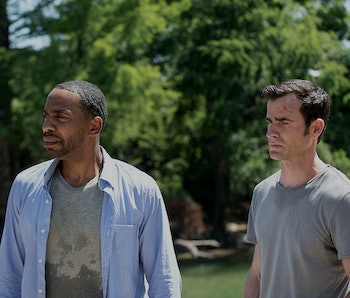 As The Leftovers returns with its second season, we break down what’s weird, what’s mysterious, and what’s simply The Fuck? on this intriguing, frequently puzzling, never dull show. Without further ado, let’s dive into the fourth episode, “Orange Sticker.”

Patti’s revelation that she saw Evie and her friends vanish and saw Kevin try to kill himself. I’m not sure if she has some measure of omnipotence and really did see this, or if she’s just messing with Kevin — I talked to actress Ann Dowd about Patti to find out —but Patti has become the comic relief voice of the show, and it’s fantastic. I was initially skeptical when I heard Ann Dowd was returning this season, because although she’s a great actress, Patti isn’t exactly a “fun” or “likable” character, and her presence signified that the “Crazy Kevin” plotline was still very much alive. But by making her into a character who brings some much-needed lightness and humor– and removing all the dog-shooting—they’re making the “Crazy Kevin” plotline far more compelling. Is he crazy? Or is he psychic, like the mysterious trailer man and possibly his father? I know Damon Lindelof has a controversial track record with this area, but as someone who never watched Lost, I’m okay with this remaining ambiguous. He’s also playing in Tom Perrotta’s world rather than creating his own this time around, and Perrotta excels at ambiguous-yet-satisfying resolutions.

Nora losing her shit. That first scene when she thinks Kevin departed; the look on her face when he turns up again; her passive-aggressive treatment of him the rest of the episode, her frozen, anguished face when she hears her brother praying and saying “we are spared” with a serene smile; her casual corruption of a teenager — now there’s the Nora we’ve been waiting for. Don’t get me wrong, I want Nora to be happy, but she was far too normal and domestic in the first few episodes. There’s something about Nora when she’s lost and unhinged—and maybe it’s simply Carrie Coon’s performance — that’s immensely compelling.

As everyone who likes this show knows, its appeal is difficult to explain to those who don’t watch it. Beyond a production level — stellar acting, writing, and filming — what really makes it a cut above other material on TV is its characters. Almost all of them are fucked up and complicated and constantly on the brink of a manic state, and yet somehow it doesn’t feel melodramatic, contrived, or overacted. This show’s philosophical angle is the part that gets talked about the most. But on a more micro character-level, the show is also an anthropology experiment: let’s shove every character off a cliff and watch how they flail. And Nora has always been the character with the most interesting flailing. Although I was blown away by this season’s first three episodes, I missed Nora as she was in Season 1. When she’s happy and has a baby, I’m glad for her; but when she’s freaking out and being passive-aggressive to Kevin and demanding to know “is this place real?” and whipping out handcuffs — now that’s our Nora.

WTFs to file away for the future:

Last season, just as I would have laughed if you said “next year you will find Tom Garvey interesting,” I would have also laughed if you said, “The Leftovers will be better than Game of Thrones at something.” But this season, it’s true: The Leftovers is beating Game of Thrones at something. Well, a few things. The reason Game of Thrones is the best show on TV — aside from its general quality and sheer scope — is that unlike most other shows, there’s no such thing as a bad episode. Sure, there might be scenes and plotlines you don’t like; you might have to watch a few characters you don’t care about before the ones you do care about come on screen. But because Game of Thrones jumps around to so many characters and plotlines, every episode has at least something that grabs you.

The Leftovers is also jumping around to a wide cast of characters and plotlines, but its ballsy decision to channel this schizophrenia into a laser focus on one per episode is having a curious effect: it’s making every character and plotline interesting. Game of Thrones hasn’t quite managed that; I still grit my teeth and wait out Daenerys’ and Theon’s parts or the Sam and Gilly story arc. But somehow, The Leftovers engages me in these narratives, even the ones I previously wrote off. Tom used to be a snooze but now I’m eagerly anticipating his scenes; the Crazy Kevin plotline was getting tiresome but now it’s evolved into something more compelling than rogue wildlife; John Murphy could easily be one-dimensional but Kevin Carroll infuses him with pathos. Patti was gratingly unpleasant last season, now she’s hilarious. This season doesn’t feature a single character whose screen time is my automatic snack break. I honestly can’t think of another show that does that. Maybe Penny Dreadful, but Dorian is hit-or-miss. Leftovers showrunner Damon Lindelof has said about Game of Thrones that he “doesn’t know how they do it,” but this season of The Leftovers, he’s leaving me saying the same thing.