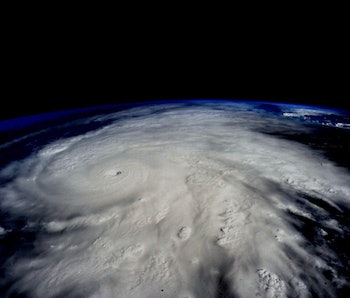 Thankfully, Patricia (a.k.a. the tropical-storm-formerly-known-as-a-hurricane) has calmed down significantly since initial reports that the then-hurricane was going to devastate Mexico’s Pacific coastline.

Here are a few of the most epic, eye-popping photos (and a video) of Hurricane Tropical Storm Patricia from above:

Astronaut Scott Kelly — record-breaker for most days spent in space — had a particularly stunning vantage of Patricia over the past 24 hours as the storm grew and dissipated:

However, looking at an astronaut’s-eye-view of what seems like a huge, whirling mass of frothed milk don’t necessarily impress the gravity of these storms as they actually hit land.

We’ve collected some of the photos of Patricia on the coastline to give a more simpler perspective of what actually happens when huge storms make landfall and what goes into prepping the communities in those areas:

More like this
Science
12 hours ago
ChatGPT could help students cheat — but it could also revolutionize education
By The Conversation and Sam Illingworth
Science
11 hours ago
The best mystery thriller on Netflix ignores a basic fact about hydrogen energy
By Tara Yarlagadda
Science
6 hours ago
Viruses can speed up atypical brain aging — vaccines may offer peace of mind
By Andrew Bubak, Diego Restrepo, Maria Nagel and The Conversation
LEARN SOMETHING NEW EVERY DAY.
Share: