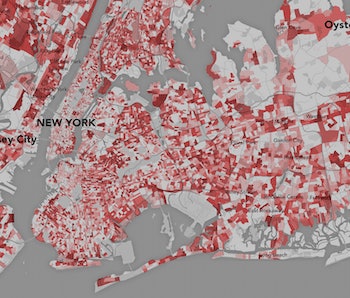 Almost a year ago, a fire in the Broadmoor neighborhood of New Orleans ravaged a home. Five people died, three of whom were children. The city’s fire department found that the house had been missing one essential, life-saving element: a functioning smoke detector.

Frustrated with the knowledge that this tragedy could have been prevented, the city reached out to a New York-based data group for help.

Together they built a predictive model, based on data analytics, to identify which neighborhoods are least likely to have smoke alarms — but most likely to experience a fatality from fires. They determine this by collecting data on population density, at-risk population (those younger than 5 or older than 65), overall population, home fire risk (defined as residential fires per capita), and other factors.

Now Enigma, the firm behind the model’s infrastructure, has expanded the project to include the thirty largest metropolitan “statistical areas” in the United States.

Utilizing data from sources like the Census’ American Housing Survey and the American Community Survey, they are able to determine risk scores — the probability that homes on a given block lack working smoke alarms — per neighborhood. Their project, Smoke Signals, is the first to use public data to help reduce fire-caused deaths.

“Our goal is to provide a tool that helps fire departments and other groups work more efficiently,” Enigma states on its website. “Local fire department outreach coordinators can combine their on-the-ground knowledge about their areas with trained models scored at a newly enhanced geographic granularity.

Fire departments across the country have programs to provide low-income and at-risk communities with smoke alarms. But the problem with many of these programs is efficiency — determining which homes are the most at-risk and methodically providing them with free alarms.

Using this model, the New Orleans Fire Department is able to go door-to-door to the city’s most vulnerable residencies and not only provide smoke alarms but evaluate whether the people who live there are at an increased risk of injury. They also can evaluate the layout and condition of the building so if a fire does occur, they already have a game plan.

“In launching this initiative, the New Orleans Fire Department is becoming one of the most innovative, data-driven departments in the country,” said Oliver Wise, the director of the city’s Office of Performance and Accountability, in a press release.

Every year 25,000 people are killed or injured in the one million fires that occur across the country. In 2014 alone, one home fire was reported every 85 seconds. Between 2009 and 2013, fires in homes without alarms caused an average of 940 deaths per year. While in municipal surveys almost all households indicate having smoke alarms, in reality smoke alarms are present in slightly less than three-quarters of reported home fires and operated correctly in only half of them.

An increasing number of cities of all sizes have begun to approach Enigma about using this tool. Meanwhile, they hope that “civic hackers” join in the effort as well and encourage people with fire incident data to contribute to their open-sourced site.

More like this
Science
7.29.2022 10:00 AM
Which animals get Covid-19? A new database tracks cases around the world
By Jennifer Walter
Innovation
8.5.2022 6:30 PM
This breakthrough stem-cell therapy could reverse genetic blindness
By Charles Q. Choi
Innovation
8.5.2022 11:00 AM
Alexa could diagnose Alzheimer’s and other brain conditions — should it?
By Joanna Thompson
Related Tags
Share: