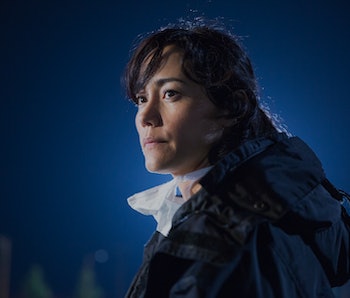 I was wrong about Fear the Walking Dead. At the dawn of AMC’s spin-off series from its cable juggernaut The Walking Dead, I had guessed the Fear’s story was about a family breaking apart when pushed to the point of no return. I had assumed Fear would evoke its sibling series and spread its players across post-apocalyptic LA, probably even into Nevada or some shit.

But as the credits rolled each week, I feared what its ending looked like: that they’d all be together, with some scratches here and there, and ultimately stay together. I didn’t want Fear to be The Walking Dead 1.5. I wanted Fear to be the worst the Dead universe could offer, and instead it just gave me more of what The Walking Dead just does badly.

To wit, The Walking Dead fails the most when it refuses to live up to its storytelling potential. For as long as The Walking Dead is a cable juggernaut, Daryl will be around, even though there is a smart story to be had with his demise. Maggie too, but she’s too hot and gets ratings so in she stays. Fear the Walking Dead could have lived up to its title and make this family, their lives already hanging in the balance, splinter off in the most horrific of ways. Instead, they’ve found a safe refuge in the sleekest of all Los Angeles beach homes, and cheapened a death by having none of it happen when it mattered the most.

Yeah, there are a few major deaths, but ultimately it means little. Liza’s only arc — to clash with Madison — had run its course. She could only have died at the hands of Madison or Travis, and it happened with hardly anything hanging in the balance.

It’s become apparent to me that Fear the Walking Dead was just an experiment all along. Which is fine — experimentation is good! But it would have been worth celebrating if Fear took its chance to be bold with its short time, to really show how fucking awful the apocalypse could and should be. Turns out, if you’re okay with no power and staying with your family, it isn’t too bad.

The Strain’s second season was a sharp counterpoint to Fear the Walking Dead, and it’s oddly fitting how both ended on the same night. Even with its similarities, both shows could not be more different politically and thematically. The Strain ended how Fear the Walking Dead should have, with a nearly broken family spread across New York in varying degrees of distress. The Strain tackled the question that caused their whole mess straight on, featuring characters who are scientists and specialists and experts in whatever bizarre fields they’re in.

Fear was just average, sometimes really fucking dumb people trying to survive, and compelling television that did not make. Fear was comfortable having its characters survive by sheer resiliency, stubbornness, and ignorance, while The Strain forced its characters to use their expertise to live to see the next morning.

In a time when intelligence is still something to be scared of, maybe Fear the Walking Dead did live up to its premise. If the characters we followed in Fear are who the human race depends on, then we’re totally fucked.