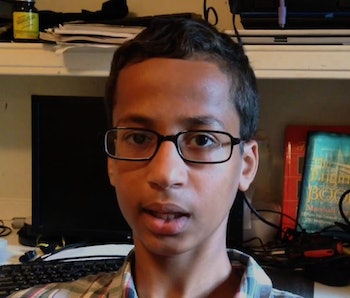 News broke this week that police had arrested 14-year-old Texas student Ahmed Mohamed for bringing his homemade digital clock to school, where teachers and later police, mistook it for something they curiously called a “hoax bomb.”

Mohamed has received overwhelming support from the country at large. He’s also gotten some pretty high-profile invitations: President Obama asked him to swing by the White House; Mark Zuckerberg said he’d love to meet Mohamed at Facebook; and Canadian astronaut Chris Hadfield invited him to join a science show.

Organized by the hobbyist magazine Make, it bills itself as a place for makers to celebrate their do-it-yourself work and ethos. Mohamed’s homemade clock should slot in perfectly, as it’s a simple innovation of creativity, curiosity, and ingenuity.

Caleb Kraft, for Make, writes that any novice builder would know Mohamed’s clock could never ever be a bomb: “Clocks are not bombs. Circuits are not bombs. The part that makes a bomb a bomb is the explosive. Anyone with a modicum of Maker knowledge could have looked at this and seen that it is just a circuit. But if your education on bombs were to come exclusively from movies, well then, maybe this project did look a little like a prop.”

Maker Faire might also be a good venue for Mohamed to gently begin his ascent into fame, as he was catapulted there quite quickly today. Before the inevitable onslaught of television interviews and think-pieces, he could just head to the New York Hall of Science in Flushing, Queens and do what he loves: build stuff. At Maker Faire, he’ll likely be lauded as not only a hero, but also as a fellow member of the community.

He can be a symbol for reform, but it’s undeniable that he is first a smart kid.